The black backed jackal is a small, fox-like animal with a tan coat and a contrasting black 'saddle' across its back. Only found in Africa, they live in monogamous pairs for life, and together will defend their territory, hunt as a team and share food, and care for their offspring. 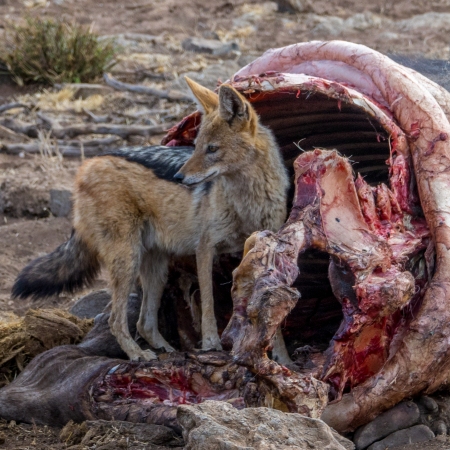 When separated, they call to each other constantly, and their yelping call is a common sound in the African bush at sunset.

Black backed jackals can be found in a variety of habitats, from open grasslands to even city suburbs. They are mainly nocturnal hunters, but can also be seen out during the day foraging for food. Their diet is omnivorous, and will consist of anything from small invertebrates such as beetles and grasshoppers, to mice, hares, young antelope, birds, snakes, and berries and fruit.

They are also not adverse to scavenging from lions and hyenas if given the opportunity.

The female will usually give birth underground in a disused burrow between July and August. Up to 4 pups are born in a litter, and eagles pose a big threat to their safety until they are fully grown.

Pups are therefore kept hidden in the den until they are about 3 weeks old, but when they do venture out, the parents are always close at hand to protect their offspring.

At 3-4 months, the pups will start to venture out on foraging expeditions with their parents. By the time they are 8 months old, the pups are completely self-sufficient, and normally leave to set up their own territories.