Facts about The Marabou Stork

A very strong contender for the 'ugly bird' award

Over 1.5m in height, and with a wingspan of up to 3m, the marabou stork is certainly not an attractive bird.

Its head and neck are pink and featherless, and under its neck it has a large fleshy pouch. The pouch is used in courtship rituals. 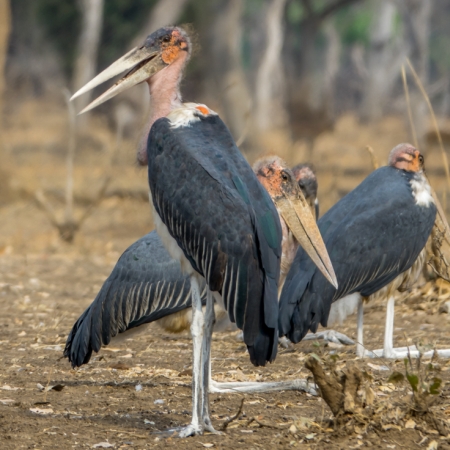 Its soft, white tail feathers are known as marabou, and were once used to trim hats and gowns and to make scarves.

The white legs are actually where the stork has defecated on itself to keep cool in the hot African climate.

Although it is usually silent, the marabou stork occasionally grunts, croaks, or rattle its bill. The stork will use its throat pouch to make these noises, especially during courtship.

Found throughout Africa, they are social birds, and will gather in small groups, usually near lakes or rivers.

The marabou stork is primarily a scavenger, and can often be found around the carcasses left over from a lion kill, or around rubbish tips.  They also eat live prey, including fish, reptiles and locusts.

During a grass fire, a marabou stork is a common sight waiting at the edge of the fire to catch the small animals as they flee to safety.

Marabou storks reach sexual maturity when they are approximately 4 years old and usually mate for life. The female will lays on average 2 - 3 eggs, in nests made of sticks.

They breed during the dry season because at this time the water levels are low, which make it easier to catch frogs and fish to feed the young.  They can live for as long as 25 years.;