Facts about The Vervet Monkey

With its black face outlined in white, its light coloured body, and long tail, the vervet monkey is the most common monkey species in Southern and East Africa. The adult males have a pale blue scrotum and scarlet penis, and are generally larger than the females.  Both the males and females have long, sharp canine teeth.

Because of their small size, they are easy prey for eagles and leopard, and as a result rarely venture far from the safety of the trees. Their fastest gait is a bounding gallop, and they are extremely agile climbers - ascending and descending trees headfirst and using their tails as a balance. 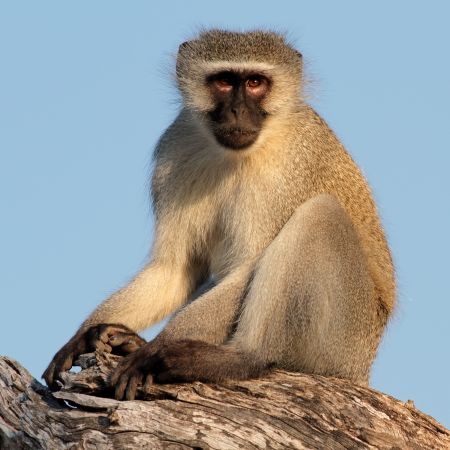 Vervet monkeys eat whatever is most abundant and available, including fruit, seeds, leaves, buds, invertebrates and occasionally eggs and nestling birds. When foraging on the ground, they will upturn sticks, small logs and dung in search of beetles and undigested seeds.

The leopard is their worst enemy, and a troop of vervet monkeys will frequently follow a prowling leopard, barking and coughing at it from the safety of the treetops to betray its movements.

The Disadvantages of being a Male Vervet Monkey

Although females remain in the troop for life, young males are chased out of the troop by the leader when they reach maturity (about 4 - 5 years old) and have to find another troop to join. Males are very rarely solitary, as it is too dangerous to be on their own without the added protection of the other troop members.

Mothers and their Young

Females can give birth at any time of the year, and have a very strong protective bond with their young.  The female will take full responsibility for caring for her offspring, as the males will show little or no interest in the infants. The young infant is frequently seen clinging to its mother's breast, and will use its tail as an anchor around its mother's tail to further secure its position.

The Complex Social Status within Troops

They live in troops of on average 25 monkeys, but this can vary in size from anything from 5 to 50.  The troop sleep, forage and rest together. There can be up to 8 males in any one troop, but only one male will act as the troop leader. The social hierarchy in the troop is complex, with the female's rank in the troop pre-determining her offsprings. Ranking is important, as the higher-ranking females have priority over food and water, so they and their off-spring are more likely to survive than lower-ranking families in times of famine.

The vervet monkey has a wide repertoire of calls and sounds, as well as physical gestures which can indicate social status, aggressiveness or dominance within the troop.