Everything you need to know about the 'King of the Jungle'.

Black, white or just plain grey? Here are facts anyway about this famous creature of the African bush!

The 'McDonalds' of the African bush... read why!

Ever wondered why the elephant has a long nose?

Southern Africa has a long history of people and wild animals living side-by-side, and folklore plays an important part in all the major cultures of the region. These stories, are of deep interest and value to South Africans, and hopefully will be of some value to those of you who have either an interest in animals or who appreciate the folklore of other countries.

Even under the tremendous pressure that the country has been under in the past, the people still appreciate and hold these stories as some what of a privellage to be told.

This was a way in which these people passed on life lessons to there children and to one another, teaching good moral values.

We have selected a few of our favourites below for you to enjoy.

***When the Cheetah Cried

One day, a hunter left his village to go and find food for his family.  He passed a small clearing, and noticed a young Impala who had strayed away from the main herd.

While the hunter was working out the best way to catch the Impala, he noticed a mother Cheetah in the  long grass near the Impala.

Suddenly, the Cheetah leapt out of the grass and with great speed bore down and caught the Impala before it had a chance to run away.The hunter marvelled at the Cheetah's hunting ability, and wished that he could have a Cheetah to train to catch food for him.

Suddenly, he noticed her 3 young cubs sitting nearby in the shade of a tree, watching their mother kill the Impala for their dinner.

"This could be the answer," thought the hunter.  "Why don't I steal one of the cubs and take it back to the village with me, so that I can train it to hunt for me instead."  Read more about why the Cheetah Cried.

In the Beginning, the Buffalo used to hunt and eat meat, and was the King of the Bush.  All the other animals, including the Lion, feared Buffalo

O  ne day, Lion was sleeping under a tree when Buffalo walked past.  Buffalo was just about to charge Lion, when Lion awoke and begged for mercy.

"Please do not kill me,"  said Lion.  "If you save my life, I will forever be indebted to you."

Buffalo was quite a lazy animal, and he could see a way to use Lion.  Read more about the Buffalo and the lion.

***Why the Rhino is Bad-Tempered

One year, there was a terrible drought.  All the waterholes dried up, and all the grass became very pa  rched and bitter tasting.  All the animals were extremely hungry.

Giraffe realised that the leaves on the tree tops were still fresh and tasty, and he tried to stretch his neck upwards to reach them, but couldn't.

His friend, Rhino, seeing his friend try this, laughed at how silly he looked.  Giraffe was annoyed at being laughed at, and stormed off into the bush.

He passed an old man who asked why Giraffe was so angry. Giraffe told him.  Read more about Why the Rhino is Bad-Tempered.

***Why the Hippo Scatters his Dung

When The Creator made all the animals, he forgot about the Hippo, so had to make the Hippo out of all the remaining animal parts.  Hippo hated the way he looked, and was too embarrassed to live on the land.

He begged The Creator to let him live in the water, where he could hide away.

The Creator refused, because he thought that Hippo, with his large mouth and teeth, would eat all the fish.

Hippo promised that he would not eat any fish, and would only eat grass, but would only come out of the water at night to eat because he didn't want the other animals to see him.

Again, The Creator refused permission for Hippo to live in the water, because he still did not believe that Hippo would not eat the fish. Read more about Why the Hippo Scatters his Dung.

***Why the Snake can Shed his Skin

In The Beginning, Man struck a deal with The Creator that he would not die.  Instead, when he got old, The Creator would send down a new skin for Man to put on, which would make him young again.

One day, Man asked The Creator to prepare him a lot of  new skins, so that he co  uld give them to all his friends and family.  The Creator worked very hard, but Man was very impatient and kept demanding that The Creator worked quicker to complete his task.When Jackal awoke, he was distraught to realise that he had been

betrayed.  He rushed to the village and told Man what had happened.

***Why the Elephant has a Trunk

The Elephant used to only have a small snout in The Beginning.  This didn't bother him unduly, in fact he was rather proud of his small nose because it never got in the way of feeding and drinking.

Because of his great size, mealtimes were very important to Elephant, and he had to eat and drink a great deal in order to keep his great strength up.

However, he did find it uncomfortable, because he had to go down on bended knees to reach anything.  One day, Elephant was at the river, and was kneeling down drinking from the fresh water.

Crocodile swam past, and saw Elephant at the water's edge.

and saw an opportunity for a good meal. Soon,

previously small snout.  He was able to reach food and drink without kneeling any more, and could even reach high branches and pull them down to eat the fruit and leaves. Read more about Why the Elephant has a Trunk.

***How the Elephant got his Tusks

The Warthog used to have beautiful long ivory tusks, but his friend, the Elephant, only had small, curling tusks.  Elephant was extremely jealous of his friend's tusks, and wanted the tusks for himself.

One day, Elephant saw Warthog out walking, and had an idea.

"Oh, Warthog," said Elephant, "I have such a problem.  I have been invited to a ball this evening, and I

am worried that my little tusks will not be grand enough.  Can I borrow your wonderful tusks just for tonight, and I will return them to you tomorrow morning?"

Of course, the trusting Warthog agreed to this, and the 2 swapped tusks. Read more on How the Elephant got his Tusks.

***Why the Warthog is so Ugly

In the Beginning, the Warthog was the most handsome animal.  He knew this, and unfortunately became very vain.

As a result, none of the other animals liked Warthog very much.

One morning, Warthog left his burrow, and wandered off with his tail proudly sticking up in search of food.

He passed Porcupine, who had been up all night foraging for food.  Porcupine was extremely tired, and wanted to go to sleep, but he still had a long way to go before he reached his home.

Porcupine had an idea.  Why not nip into Warthog's burrow and have a quick nap before Warthog returned?  So Porcupine went down the burrow and promptly fell asleep. Porcupine, who had been sleeping soundly, awoke with a start. Thinking that he was being attacked, he stood up and spread his quills ready to fend off anyone.Read more about Why the Warthog is so Ugly.

One very dark night, a mother Waterbuck was grazing near the Tribesman's wooden hut with her young calf.  The Tribesman had been very busy that day, painting his hut white, and had left the tin of white paint outside his door ready to continue his work the next morning.

The grass outside the Tribesman's front door was particularly lush, and the mother Waterbuck couldn't resist wandering over and eating it.

Her calf followed her, but unfortunately, because it was so dark, the baby Waterbuck accidentally knocked over the tin of paint, and the noise awoke the Tribesman.Read more about the Waterbuck's White Circle.

***Why the Zebra has a Stripy Coat

The Creator originally made all the animals the same.  After a while, the animals became bored with all looking alike, and asked if The Creator could do something to help them.

The Creator agreed to help, and spent weeks making many coats and horns of varying styles, shapes and sizes so that the animals could put them on and look different.

When The Creator had finished his work, he invited the animals to come along and choose what they would like.  The animals were very excited, and all eagerly rushed off.

All except the fat Zebra, who was too busy eating his dinner.  Zebra was well-known for his love of food, and nothing would come between him and his mealtimes.

When Zebra had eventually finished eating, he was extremely full, so wandered slowly along to see The Creator.  He passed many of the other animals on their way back home, and was surprised at how different they all looked now.  Read more about Why the Zebra has a Stripy Coat. 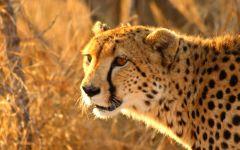