The real reason behind such a long nose

The Elephant used to only have a small snout in The Beginning. This didn't bother him unduly, in fact he was rather proud of his small nose because it never got in the way of feeding and drinking.

Because of his great size, mealtimes were very important to Elephant, and he had to eat and drink a great deal in order to keep his great strength up. However, he did find it uncomfortable, because he had to go down on bended knees to reach anything.

One day, Elephant was at the river, and was kneeling down drinking from the fresh water. Crocodile swam past, and saw Elephant at the water's edge.  Crocodile was feeling particularly hungry, and saw an opportunity for a good meal. Crocodile swam stealthily up to where Elephant was, and suddenly lunged out of the water and grabbed Elephant by the nose. 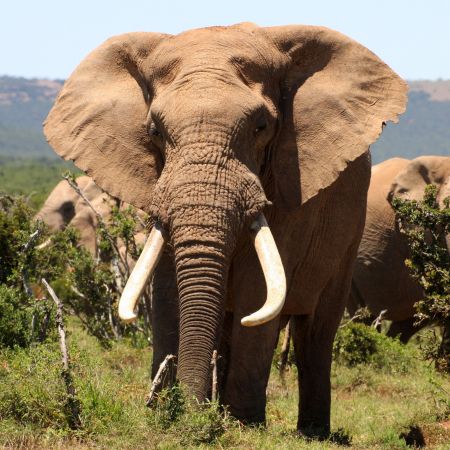 Elephant was startled, and tried to pull away, but Crocodile had a firm grip on his nose. Crocodile used all his weight and strength to try to pull Elephant into the water. However, Elephant was also very strong, and he dug his feet into the bank and fought back.

The 2 battled for hours, and with every pull and tug, Elephant's nose stretched a little more. Eventually, Crocodile became too tired to pull any more, and let go of Elephant.

Elephant ran off, with his now very long nose hanging down in front of his feet.  He was distraught, and hid in the bush as he was too embarrassed to face the other animals.

Soon, however, Elephant realised that his new stretched nose was more useful than his previously small snout.  He was able to reach food and drink without kneeling any more, and could even reach high branches and pull them down to eat the fruit and leaves.

All the other Elephants soon realised the benefits of having a long trunk, and one by one they too visited the river and taunted the Crocodile to try and pull them into the water. The Elephants always won the tug-of-wars, and all ended up with lovely stretched snouts, but Crocodile remained hungry.

To this day, all Elephants still have their long trunks rather than a small snout, and Crocodiles have learnt that it is a waste of time and energy attacking Elephants when drinking at the water's edge.