The Okavango Delta is a unique wetland area in the northern part of Botswana and contains 95% of all Botswana's surface water. It is the largest inland delta in the world and consists of a network of small islands surrounded by permanent water. It is also one of the few natural landscapes that can be seen from space. 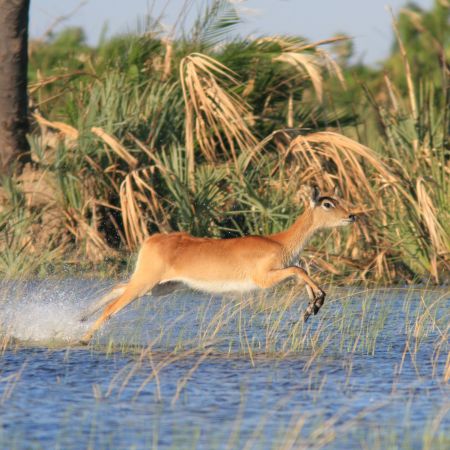 Fed by the Okavango River, the river starts its journey from its source in the Angolan highlands over a thousand kilometres away, flowing down through the Caprivi Strip and the Popa Falls in Namibia and finally spreading itself throughout the waterways and channels of the Delta, before dispersing into the dryness of the surrounding desert areas.

The Delta, a UNESCO World Heritage Site, is home to an impressive array of animals and birdlife. Elephant and buffalo roam the area, often in large herds, while  hippos navigate their way through the existing channels, or create new ones.

There is an abundance of antelope, including the shy sitatunga, creeping through the thickets. Such a mass of herbivores encourages large numbers of predators - from big lion prides and noisy family packs of hyena, to the ever cunning crocodile.

Cheetah and wild dog are a common sight on the larger grasslands while leopard are often seen stalking through the dense bush or lazing on a riverine tree branch.

The birdlife is amazing, with over 400 species having been recorded. November through to February is one of the best time for birders, with the skies full of returning migratory birds.

There is a permanent network of rivers and channels winding through the Delta throughout the year, but the overall water level of the entire region depends on the flood waters that come down from the Angolan highlands. 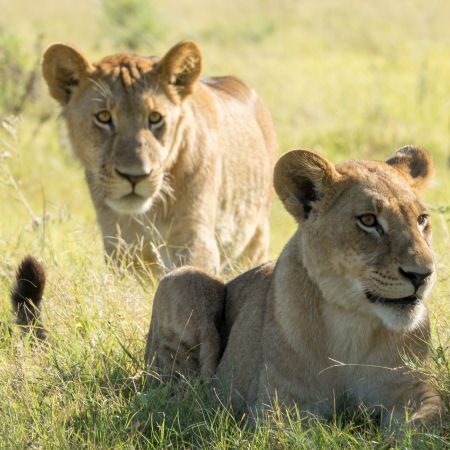 The flood waters tend to arrive in March, but the water takes a good few months to entirely spread out across the entire Delta. The Okavango Delta therefore experiences its highest water levels around June/July/August and this continues until the end of October.

The Delta is transformed into one huge floodplain, interspersed with small islands and larger dry areas. Game viewing over these months is at its peak, as the wildlife congregates towards the dry land so is less dispersed.

November sees the start of the rainy season, but the rainfall is not sufficient to keep the Delta levels at their highest. So despite the rains, the floodplains begin to dry out, which does seem completely at odds!  Many plains game give birth once the rains start, so the predators are pretty active too.  This is also a good time for birding, and coupled with rates being at their lowest over the period from November through to April, there is no reason not to visit the Delta over these months at all.

Each camp is based on its own island and surrounded by its own concession. The camps of the Delta generally fall into 3 categories - those that only offer land based activities such as game drives and game walks (also referred to as 'dry' camps); those that primarily offer water based activities such as mokoro trips, motorboat cruises and fishing (also referred to as 'wet' camps); and finally those that offer a mix of both. Depending on what you want to get out of your Delta experience will dictate the camp that you stay at - but ideally we suggest a mix of both dry and wet camps if budget/time permits, to get the true Delta experience.

Exploring the waterways in a mokoro is one of the main and unique attractions of a safari in the Delta. Traditionally hand-carved from an ebony or sausage tree log, these shallow canoes are perfect for gliding through the reeds and calm waters in search of wildlife. A 'poler' stands at one end of the canoe, and guides it silently through the channels, while up to 2 guests sit comfortably at the front and wait eagerly for the animals or birds to show themselves. 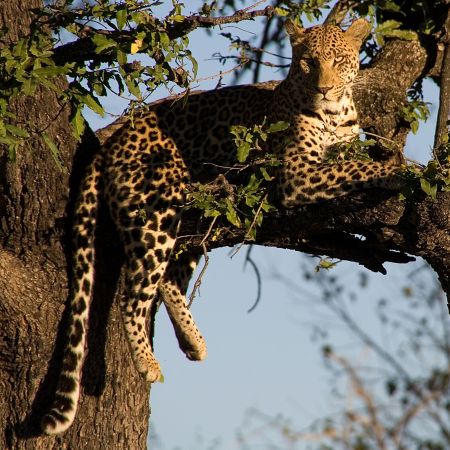 Throughout the year, some camps also offer the chance to do a helicopter flight over the Delta which is an amazing way to see the true beauty of the area and the wildlife from a birds eye perspective.

The Delta area consists of the Moremi Game Reserve, several private concessions and the 'Pan Handle' - the area around the Okavango River before it splits into many channels and fans out.

The Moremi Game Reserve covers nearly one-third of the eastern side of the Delta, and is widely considered to be one of the finest game reserves in Southern Africa. Covering an area of nearly 5,000 square kilometers, it is home to a high density of game as well as a variety of eco-systems, from mopane woodlands and acacia forest, to floodplains and lagoons, offering guests a unique 'wet and dry/land and water based' game viewing experience. No night drives, off road driving or walking safaris are allowed in Moremi, however, and the reserve is also popular with self-drive safari enthusiasts, which can sometimes lead to numerous vehicles being present at major sightings.

The area to escape the potential crowds, if you have the budget, is to go to Chief's Island - the most exclusive game viewing area in Moremi. One of the largest dry areas in the Delta, only 3 ultra 5* lodges are situated here - Mombo, Little Mombo and Chief's Camp - and only they have the right to traverse the island. Accessible only by light aircraft, Chief's Island has exceptional game viewing, and white rhinos have also been re-introduced here, making this a truly top safari experience - although again, no night drives are allowed.

For most guests to this area, visiting the Delta will require a scheduled flight to Maun, where you will then be met and transferred to your lodge. Depending on the time of year and the lodge's location in the Delta, some lodges can be reached by road, with a journey time of anything from 4 hours upwards in a 4x4 vehicle, but other lodges can only be reached by light aircraft which will land at a small airstrip in the bush.

Situated on the island of Xaxaba, surrounded by illala palms overlooking a lagoon is Eagle Island Lodge. The area offers exceptionally high quality wildlife viewing with prolific birdlife and mammal sightings. The luxury tents are housed on raised wooden platforms, offering great views, and shaded by an African thatch roof.

Jacana Camp is an island wonderland set in a wilderness area densely populated with amazing wildlife and teeming birdlife. It is a true Okavango Delta water camp. Its 5 Meru-style tents are built on wooden decks to accentuate the views overlooking the floodplains.

Children aged 12 years and over are welcome.

Constructed as a family-friendly camp, Seba Camp offers parents the unique opportunity to introduce their children to the wonder of the African wild. Overlooking a perennial lagoon with prolific birdlife and resident pods of hippo, Seba Camp has 8 well-appointed, spacious en-suite tents.

One of the most remote camps in the Okavango, Kwetsani is an intimate yet luxurious camp raised on wooden decks above the lush vegetation. There are 5 'tree-house' chalets.

Tubu Tree Camp is located on Hunda Island, an area known for its concentrations of game and offers spectacular wildlife viewing on land, and tranquil adventures on the water. There are 8 tents, each with views of the surrounding floodplains from a private deck.

Little Vumbura is a small camp hidden on a pretty island, surrounded by the floodplains and deep, clear channels for which the Delta is famed. The beautiful 6 roomed tented camp is shaded by the forest canopy, and game viewing is consistently good all year round.