The largest collection of salt pans in the world

The Makgadikgadi Pan comprises of 3 separate salt pans - Sowa (Sua), Nxai and Ntwetwe - which together cover 12,000 square kilometres of the north-eastern part of Botswana, making this the largest collection of salt pans in the world. 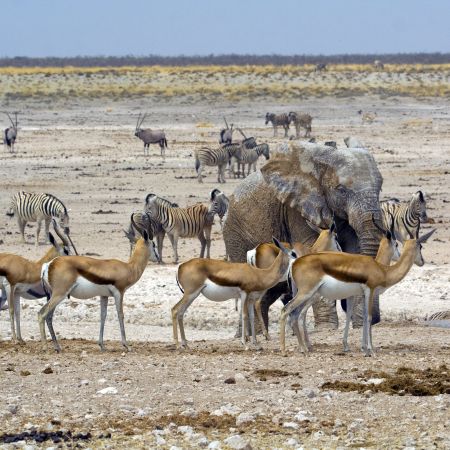 For the majority of the year, especially during the sizzling hot winter months, the stark whiteness of the vast pans reflects against the brilliant blue sky, creating eerie heat mirages that shimmer enticingly and fool the brain into thinking imaginary lakes exist on the horizon.

Then, in late November/early December time, the rains come. The dry pan is transformed into a teeming mass of wildlife, as the animals move into the area to seek much needed water, which gathers in depressions in the pan and remain long after the rains have stopped in March - sometimes until April or even May.

The outlying fringes of the pan become lush with green grass, enticing further wildlife to the area, including large herds of wildebeest, zebra and antelope in their thousands. Needless to say, there is also a healthy number of predators such as lion, cheetah and hyena, who are always present when there is an abundant of 'food' around!

Flamingos, white pelicans, ducks, geese and other water birds also flock to the pan, to nest and feed on the thousands of tiny crustaceans that have been dormant during the dry period.

A Brief History of the Region 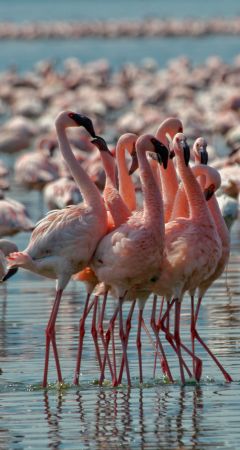 The pans were once a superlake that was formed more than 5 million years ago, which used to cover 80,000 square kilometers of land, and had a depth of 30 meters (100 feet). But 10,000 years ago, the lake started to dry up as climatic changes occured, and today all that is left are the large salt pans that are truly one of Africa's most stunning and magical natural features.

The Nxai Pan National Park adjoins the northern boundary of the Makgadikgadi Pans National Park, and is where the desert meets the delta, so you often see elephants surrounded by resident herds of springbok. Because of its location, during the summer months large herds of zebra and wildebeest migrate down from the northern parts of Chobe and the Okavango Delta, and join with the resident oryx, springbok and impala.  Unsurprisingly, predators such as lion, leopard, wild dog and cheetah are also found here.

From Maun, you can take a road transfer to your accommodation (which takes about 2 hours), or otherwise there are airstrips at both Gweta (near Ntwetwe Pan) and Nata (near Sowa Pan), which affords you a birds-eye view of the pans.

It is very easy to combine a few nights here with a safari in the Okavango Delta, then onto Chobe, and ending in Victoria Falls, which makes a lovely 10 day trip and something that will be a wealth of holiday highlights from start to end.

The camp is built on cliffs over 10 metres above the riverbed, offering a raised vantage point which ensures unsurpassed views of the river and the Makgadikgadi Pans National Park to the east. The lodge features 12 luxurious thatched and glass fronted suites with en-suite bathrooms.

Children of any age are welcome during non-peak periods.

Camp Kalahari is nestled amongst acacias and palms, on the edge of the Makgadikgadi Salt Pan. There are 12 meru safari tents. Activities include 4WD safaris in the Makgadigadi National Park, and spot-lit night drives.

Jack's Camp has 10 spacious en-suite tents with inside and outside bathrooms, all designed in a 1940's exploration style. Each tent has uninterrupted views out over the Pan offering beautiful accommodation and an oasis of civilization in what can be the harshest of stark environments.

Accommodation is in 7 billowing white tents, each protected by a cluster of desert palms. The luxury tents are all en-suite and elegantly decorated with 4 poster beds and antique furniture, such as vast wooden trunks and writing desks.

The accommodation at Planet Baobab is truly original, reflecting the traditional building methods of the original inhabitants of the Makgadikgadi Salt Pans in Botswana. You can choose between a traditional en-suite Bakalanga hut, built from mud, and a traditional grass hut, made in the way the Bushmen used to.