Witnessing 'The Greatest Show on Earth'

Welcome to the Greatest Show on Earth! The Great Migration is an overwhelming, humbling and quite simply amazing wildlife experience, and the stunning landscapes of the Serengeti and the Masai Mara form dramatic backdrops to the event.

Every year over 1.5 million wildebeest and 200,000 zebras gather on the vast plains of the Serengeti in Tanzania to begin their remarkable pilgrimage towards greener grazing lands. Following the rains, they trek north towards Kenya's Masai Mara before about-turning and heading south again. It's an expedition totalling over 1,800 miles and the journey is incredibly tough. An estimated 250,000 wildebeest and 32,000 zebra don't make it - only the strong survive.

Witnessing this astonishing feat of nature is a real life-changer. The sight of thousands upon thousands of wildebeest dotted across the savanna as far as the eye can see is something that will stay with you forever. It's one of the definitive safari experiences, and words just can't describe the feeling of being there in the flesh.

Charting the date and course of the migration is far from an exact science. The exact route and timing of the migration will vary from year-to-year depending on the rainfall and grazing conditions, and it is impossible to predict where the herds will be on any given day when you are planning a holiday many months in advance. However, we can use our safari experience to help put you in the areas where you are most likely to see the migration during your holiday time. Broadly speaking, here's a description of the route that this extraordinary race for life takes each year to help you get your planning off the ground. 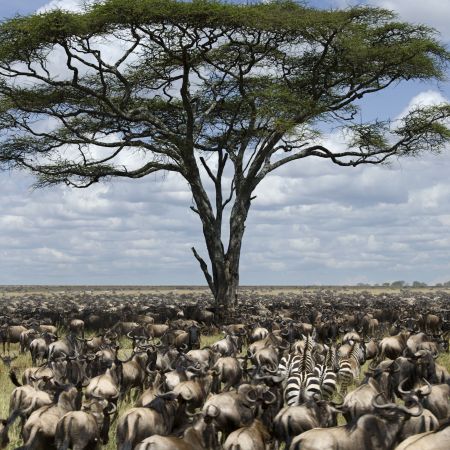 The Start of the Migration in Tanzania

The story begins with the wildebeest calving season in the Ndutu region of the Ngorongoro Conservation Area and the Southern Serengeti plains, where the wildebeest begin to congregrate together from December. This is just after the 'short' rainy season, so the grass here is rich and ideal to support the young. Amazingly, it’s estimated that 500,000 calves are born here during a tiny 4-6 week window across February-March. The mass calving season attracts all kinds of predators to the area, all eager to snag themselves newborn, wobbly-legged calves.

The Herds are On the move

As the plains start to dry up and the grass becomes rapidly depleted, the herds start moving around April time, heading for greener grasslands and more reliable water sources. Pounding the earth with millions of hooves, they travel in a general clockwise direction towards the Central Seronera Serengeti plains, leaving their now arid breeding ground behind.

The migrating herds do not move together in one solid formation however - they will split up and as such can been seen across a vast area of the Serengeti, and by May time, the herds are normally spread out across the Moru Kopjes and Central Seronera Valley area.

May is also the mating season for the wildebeest, and the competition is fierce as the male wildebeest rut and battle to win female attention and stamp their territory. These strapping contests of manhood are staggering to behold.

The herds also don't always follow the same migration route. Depending on weather patterns, some of the herds will continue from the Central Plains straight up the Serengeti on a more direct route towards the Northern Plains, and others will veer off to the left and find themselves heading towards the Western Corridor and the Grumeti River.

Many Rivers To Cross...

By June, those that veered off reach the Grumeti River to face their first river crossing. For many, unfortunately, it is also their last. Weary from their slog so far, many of the animals do not have the strength to run the gauntlet of large, hungry crocodiles and cross to the safety of the opposite bank. 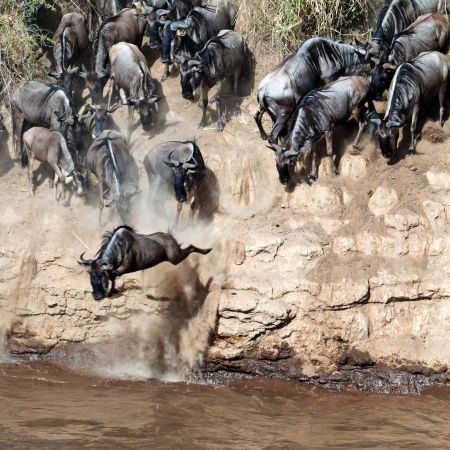 The lucky ones that make it across the Grumeti River now push further northwards, drawn by the promise of the lush pastures of Kenya's Masai Mara, just across the border.

The wildebeest herds begin amassing on the Northern Serengeti Plains around July time in their thousands. But before they are rewarded with the temptingly near grasslands of the Masai Mara, they are forced to face a more dramatic river crossing.

This time it’s the fast flowing, deep Mara River, beset once again with danger from eddying currents, steep riverbanks and swarming crocodiles. This is the most perilous part of the journey and it’s a literal case of survival of the fittest - a spectacular show of nature at its wildest and most brutal.

Crossings occur into August but from late August, Tanzanis has said goodbye to the majority of the wildebeest and zebra - although it fair to say there are still plenty who have chosen to remain and not face the Mara River.

In August, the Masai Mara plains in Kenya start filling up with grazing wildebeest and zebra.

But it is not all plain sailing. As the Mara River flows up from the Northern Serengeti into the Masai Mara Reserve, some of the herds potentially face yet another dangerous river crossing here as well. Simariliy fast flowing and filled with hungry crocodiles lying in wait, the wildebeest plunge into the rivers from the steep riverbanks, many losing their lives here so near the very end of their journey. But even having survived all the river crossings, this still doesn’t mean that life becomes easy, as danger then lurks in the form of hunting prides of lion and hyena. Wherever the herd goes, the predators follow.

The animals set off on their journey back towards the Southern Serengeti around mid-October time to complete this incredible circle of life - drawn by the promise of the rains beginning again in the south around November time. Yet another Mara River crossing stands in their way as they cross back into the Northern Serengeti on their trek towards their trusted calving grounds.

And so the story repeats itself year after year. For the wildebeest and zebra, the journey never really ends. It’s constantly on the move in a struggle for survival.

It is possible, with some very careful planning, to catch this phenomenon and see part of this story in action. You can witness the migration at its different stages from a number of safari lodges and mobile tented camps located along the various migration routes. As safari experiences go, there’s nothing that can touch it. 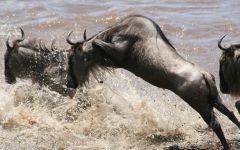 The vast plains of the Masai Mara come truly alive from the end of July through to mid October time, when over 1.5 million wildebeest and 200,000 zebra migrate here from The Serengeti. This is truly nature at its most dramatic. 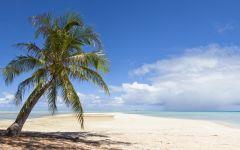 Tanzania's Northern Safari Circuit is the place of safari and beach dreams - vast plains stretching into a hazy horizon dotted with wildlife coupled with soft, white sands laced with coconut palms. Add to this the possibility of also witnessing the Great Migration crossing the Serengeti Plains depending on when you are holidaying here, and this really is Africa at its most epic.