The Central Kalahari region of the Kalahari Desert covers a vast section of Botswana.  Despite its name, the Kalahari Desert is not actually a true desert, because it does receive small amounts of rainfall - so some parts have acacia and grassy plains that stretch endlessly into the distance. 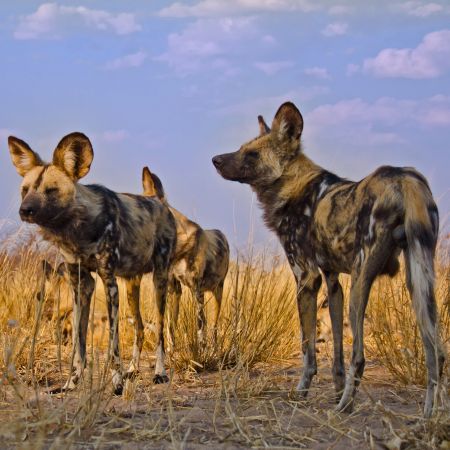 The Central Kalahari Game Reserve is the largest game reserve in Botswana (and second largest in the world), and covers some 52,800 square kilometers - so larger than Denmark or Switzerland.  It was established as a National Park in 1961. The reserve is made up of open plains, which sit alongside salt pans, ancient river beds, and sand dunes, making for a varied and interesting landscape.

Game viewing is best between December and April, which is during the rainy season, characterised by fast and frequent rainstorms. The vast open plains burst into life at the first rainfall, turning this area into one of the prime game viewing destinations in Africa.

Huge herds of zebra, wildebeest, springbok, oryx, eland and kudu fill the now grassy plains as far as the eye can see - and you can be sure that the predators such as cheetah, wild dog, jackal, leopard, brown hyena and lion are not far away! Visitors here will also be able to see giraffe, warthog, red hartebeest and over 220 bird species.

Outside of the rainy season, between May to October, it is extremely hot and dusty in the Kalahari, and the animals depart in search of water again.  October is by far the hottest month, with daytime temperatures soaring as high as 40°C (104°F) and more.

As well as the wildlife, the reserve is also home to the Bushmen, or to give them their proper name, the Basarwa or San people, who have inhabited the land for thousands of years. Today, rather than roaming as nomadic hunters and gatherers, they live in settlements, some of which are situated in the southern part of the reserve. There are moves by the Government, however, to persuade them to move out of the reserve so that they can benefit from integrating within society, and reaping the benefits of schooling, education and healthcare.

The hospitality at the lodge can best be described as a real home away from home, and a genuine ease prevails. Most of the staff are made up of San people, who have worked alongside the De Graff family for generations.

Dinaka’s tents are well spaced and raised up on wooden decks giving the perfect vantage point over a permanent water hole. The tents are connected by wooden walkways.

Tau Pan Camp consists of 9 environmentally adapted en-suite tents including 1 family tent, which are set on raised decks. The central area houses the dining room, lounge and game viewing and star gazing deck and all areas are connected by sand path walkways.

Children of any age are welcome during non-peak periods.

The lodge offers all the facilities that ensure a comfortable and relaxing stay. With a stunning location overlooking the waterhole, each of the 8 spacious suites has a bedroom, separate lounge area, and an en-suite bathroom with Victorian bath and outdoor shower.

Kalahari Plains Camp comprises of 8 canvas units (including one family unit), each with its own sleep-out rooftop platform from which to enjoy the endless horizons and beautiful starry skies, as you are lulled to sleep by the sounds of Africa.