Home to the largest elephant population in the world

The Chobe National Park is the 2nd largest National Park in Botswana, covering an area of 10,566 square kilometres, and borders the Moremi Game Reserve in the Okavango Delta in the extreme south-west corner, with the Chobe River forming its the northern boundary. 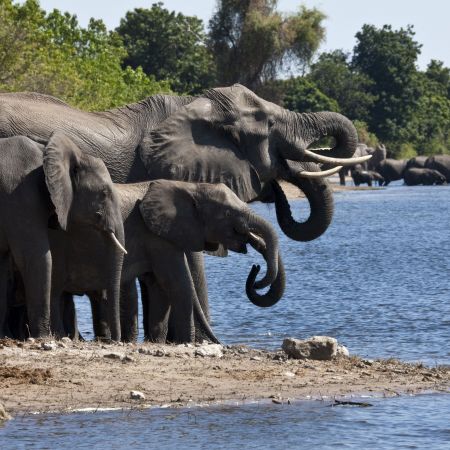 The Park is most famous for its elephant population.  Today, it is home to over 50,000 elephants - which is believed to be the highest concentration of elephants found anywhere in the world.

But it is not only elephants that live here in huge numbers - hippos are plentiful, and float lazily in the Chobe River during the day, emerging at dusk to graze along the river banks.  Large herds of buffalo, zebra and lechwe (a type of antelope) are also common sightings.

Lion are never far away and are often seen in large prides, lazing around in the shade during the heat of the day and slowly awakening themselves at dusk.  Hyena and leopard also hunt at night and are often seen once the sun goes down, whilst another predator, the cheetah, can be seen stalking its prey during the day.

The area is also renowned for its rich birdlife, especially around the numerous waterways - in fact, over 450 species have been documented.

Possibly the most visited section of the Park is the scenic Chobe Riverfront area, which is also known as Serondela.  River safari cruises offer visitors a unique safari experience, and are a great way to watch the wildlife as the animals comes down to the river to drink - giving you a completely different viewing perspective and some great photo opportunities.

And talking about viewing game from different perspectives, it is also possible to do a hot air balloon safari over the Seloko Plains. The safari lasts for an hour and operates from 1st May until 15th September. 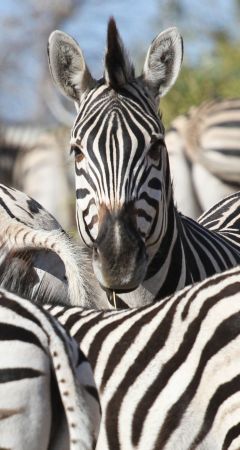 The floodplains of the Chobe River also boast their own African migration - the Zebra Migration. Not quite to the same scale as the Great Migration of the wildebeest and zebra in East Africa, this migration is still pretty impressive if you are able to plan your trip to witness it.  Every year around February/March time, thousands of zebra (estimated numbers are around 15,000) migrate from the southern Nxai Pan northwards to the Chobe floodplains - a direct distance of about 250 km but most of the zebra will take a longer route and can travel up to 800 km - which means they start to arrive in Chobe from around May onwards. The zebra tend to stay spread across the Chobe floodplains until around early November, and when the first rains fall in Nxai Pan, they head back down south again. Oddly, though, they take a more direct route this time, and normally arrive back in Nxai Pan having taken just 2-3 weeks to do the southwards journey.

The quieter south-western corner of the Chobe National Park is known as the Savuti Region (also spelt Savute), which covers almost 5,000 square kilometres and is renowned as a prime game viewing area.

For visitors wanting to experience this beautiful area, most people will fly into Kasane, which is right next door to the Chobe Park and take a road transfer to their chosen lodge.

Another popular route is for visitors to combine a safari in Chobe with a stay at Victoria Falls. From the Falls to Kasane is only about 90 minutes (excluding time spent at the border post). Those visitors coming from the Livingstone/Zambia side of the Falls have the added excitement of a short trip across the mighty Zambezi River in a speed boat to cross from Zambia into Botswana.

The Park, especially the Riverfront area, is also extremely popular with day visitors from the Falls, who visit the Park for just a short game drive and river safari trip and then head back to their Falls accommodation late afternoon.

On the very doorstep of the Chobe National Park, which hosts the largest concentration of elephant in Southern Africa, lies Chobe Safari Lodge. Game drives into the Chobe National Park depart twice daily, or alternatively, guests can choose to go on a full day game drive, including picnic lunch, or on a boat cruise.

Each of the lodges 11 en-suite rooms are exquisitely furnished and have a wonderful African ambience. The lodge is situated on the quiet western edge of the Chobe National Park, and guests can enjoy game drives in the Park and boat cruises along the Chobe River.

Meaning 'Place of High View' in the local language of Setswana, the lodge sits above the Chobe River in the Chobe National Park, and offers unparalleled panoramic views across the islands and flood plains onto Namibia's Caprivi Strip. There are 15 suites in total.

The camp comprises 20 'meru' style luxury safari tents and can accommodate a maximum of 40 guests.  There are 12 Forest Tents (including one Family Tent) in the shady canopy of trees surrounding the swimming pool, and 8 Valley Tents which have views overlooking the valley and waterhole.

Accommodation is in thatched suites, with private lounges and modern comforts such as air conditioning, ceiling fans, satellite TV, telephones and mini bars. All rooms look out over the river and the lush, landscaped gardens.