One of the 7 Wonders of the World

Only a short 2 hour flight from Johannesburg, a trip to Victoria Falls is certainly memorable. One of the 7 Wonders of the World, the Falls are situated between Zambia and Zimbabwe, and with a width of 1.7 km and a volume of 9 million litres per second pouring down a vertical drop of just over 100m they are certainly one of the largest waterfalls in the world. 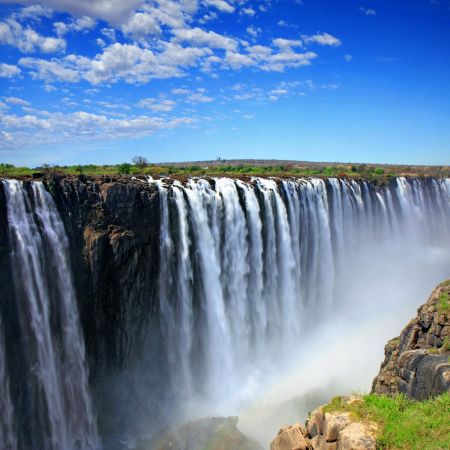 The sheer noise of the Falls as they cascade over the edge into the deep gorge is deafening, and the misty clouds of spray, occasionally broken by rainbows, are visible from over 30 km away - hence it's local name, Mosi-oa-Tunya, "The smoke that thunders".

The Victoria Falls are one of Southern Africa's most popular tourist attractions, and are a UNESCO World Heritage Site. Visitors to the Falls can view them from either the Zambia or the Zimbabwe side.

The big tourist draw of the Victoria Falls from the Zimbabwean side is that visitors can view virtually the whole width of the Falls face-on, at the same level as the top of the Falls where the mighty Zambezi River drops over the edge into the gorge. In some places you can get as close as 60m - although you should be warned - at these points you do get incredibly wet from the spray! Covering your camera and video equipment with a plastic bag is definately advised!

Viewing the Falls from the Zambia side is as exciting, however, as you can make your way across the aptly named Knife-Edge Bridge and are awarded with some stunning views of the Falls with maybe the odd rainbow peaking through - but again, be prepared to get thoroughly soaked with the spray if the Falls are at full flood!

The Falls are at their most spectacular around March/April time, when the Zambezi River is at its annual peak flooding time. The lowest water flow over the Falls occurs in November and December, and in some parts of the Falls no water falls at all.

For a full on safari experience, many visitors to the Falls combine their stay here with a safari - heading either to one of Zambia's National Parks, the Hwange National Park which is the largest National Park in Zimbabwe, or travelling further north and crossing into Botswana, where a safari in the Chobe National Park and even the Okavango Delta can be experienced.

The History of the Falls

The first European to set eyes on the Victoria Falls was David Livingstone, on 17th November 1855. Although the Falls were well known to local tribes, the Europeans were very disbelieving of the true nature of the Falls, given the surrounding landscape and lack of mountains and valleys on the plateau. 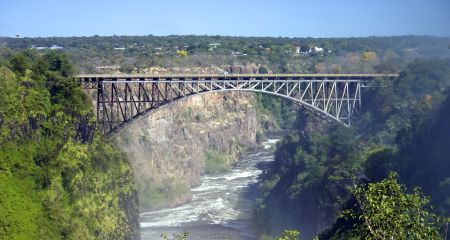 However, when Scottish-born Livingstone made his now famous journey down the Zambezi, and eventually reached the Falls, he found them to be incredibly impressive, and named them after his Queen at the time, Queen Victoria.

He wrote of the Falls - "No one can imagine the beauty of the view from anything witnessed in England. It had never been seen before by European eyes; but scenes so lovely must have been gazed upon by angels in their flight".  Indeed, the thousands of tourists that have since flocked to view the Falls would not disagree with this statement!

The Victoria Falls Bridge, that crosses the river between Zimbabwe to Zambia, was commissioned by Cecil John Rhodes in 1900. His wish was that a "railway should cross the Zambezi just below the Victoria Falls and have the spray of the Falls over the carriages". His wish was certainly granted, as the bridge affords magnificent views of the Falls from one side and down the gorge on the other.