Located just below the world famous Victoria Falls and sharing a border with Botswana to the west is where you will find Hwange, the largest National Park in Zimbabwe. Covering over 14,650 square km, the Park has a long royal history dating back to the early 19th Century, and was proclaimed a National Park in 1929. 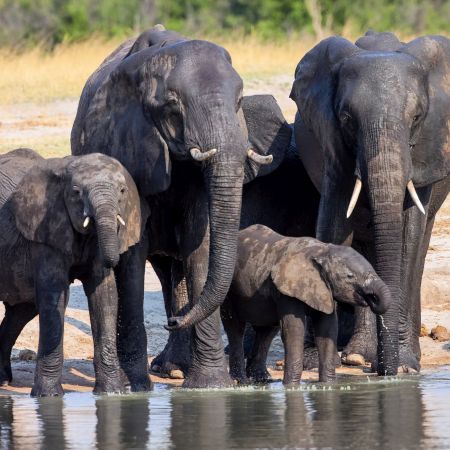 One of the key reasons as to why Hwange is such a popular safari destination is its large elephant population, which is one of the largest in the world. But it is not just about the impressive elephant numbers - the Park boasts an outstanding array of other wildlife, made up of over 100 mammal species including lion, zebra, buffalo, hyena, antelope, giraffe, wild dog, cheetah, rhino and leopard. For those of you who are keen birders, the Park is also home to some 400 recorded bird species.

The prime time to visit Hwange is during the dry season (from June to October), as the many waterholes (some artificially pumped with water as a necessity to sustain the wildlife during these dry, unforgiving months) act as magnets and attract game throughout the day and evening – leading to entertaining encounters and interactions!

However, during the rainy season (November through to the end of April) the Park transforms from a dry and parched landscape to one that is green and lush, and dramatic late afternoon or early morning thunderstorms roll across the plains. With this change of season, the game viewing is less abundant as the animals disperse due to the availability of more water, but newborn calves are everywhere to be seen, and the bird population flourishes due to the arrival of migrant species such as the stunning Southern Carmine Bee-Eaters and Broad-Billed Rollers. 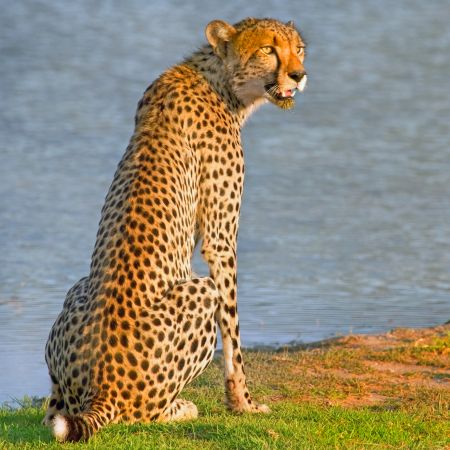 The Park can be easily accessed from Victoria Falls, either by a road transfer to the Main Gate (around 2 hours followed by a transfer/partial game drive through the Park to your accommodation) or a 30 minute flight to either Hwange National Park Airport or a specific lodge airstrip. You can also travel by 'The Elephant Express' from the entrance of the Park to certain camps - where a refurbished railcar trundles 70 km along an historic railway track, making a real feature of the journey!

All this makes it very easy to combine both the Falls and the Park, and we would suggest starting with the sights and sounds of Mosi-Oa-Tunya (The Smoke that Thunders) and then going onto experience an incredible safari in this vast and diverse National Park.

Whether you are a seasoned safari goer or it’s your first time to Zimbabwe or indeed on safari, or if you are travelling with a young family or even on honeymoon, there is a variety of camps and lodges to suit all budgets and tastes here. If you are looking for a safari experience in a camp that offers a more wild and remote experience, or a lodge setting where you can relax on your private deck and dip your toe into your private plunge pool; or if you are on honeymoon and you have dreams of a romantic bush dinner for just the two of you under the stars; or if you want your children to participate fully in the safari experience with you – then look no further.

Our selection of carefully chosen camps and lodges below will hopefully inspire you to contact us to ask us to include them in an itinerary for you so that you too can experience the wonder that is Hwange National Park.

The Hide Safari Camp offers 10 beautiful tented suites with views over the waterhole, where animals congregate day and night. Adventures include day and night game drives, guided bush walks, watching the wildlife from a hide, and tree house sleep outs.

Children aged 10 years and older are welcome at the main camp.

Situated on a large wildlife-rich private concession, Elephant’s Eye offers an unforgettable safari experience within the African wilderness. The camp comprises of 8 tented chalets plus a sleep-out deck called 'The Eye’.

Somalisa Expeditions is set in the heart of Hwange National Park, Zimbabwe’s largest and most loved National Park. The camp has just 7 elegantly furnished Meru-style safari tents which are nestled under a grove of acacia trees and offer an authentic way to experience this exceptional wildlife haven.

Situated on a large open floodplain in one of the best wildlife areas in the Park, Verney’s Camp open up onto an active waterhole. There are 10 tents, including 2 family tents, tucked perfectly under the shady trees, carefully positioned to ensure both serenity and privacy.

At Bomani you will not find rigid schedules and timetables for guests. Instead the lodge prefers to tailor your time around you. Friendly and knowledgeable guides will take you on walks or drives inside this truly wild and remote region of Hwange National Park.

Nehimba is situated inside a private concession in Hwange National Park. A truly wild and unspoilt paradise, situated on its own private wildlife estate, you can revel in the unique viewing of strongholds of elephants roaming freely without fences or restrictions.