Mana Pools is a UNESCO World Heritage Site, located in the north of Zimbabwe on the banks of the Zambezi River, with the Lower Zambezi National Park just across the river. This whole area is known for its beautiful scenery, diverse habitats and abundant wildlife, with Mana Pools establishing a reputation as one of the finest Parks in the whole of southern Africa.

Mana (meaning 'four' in the local Shona language) references the large pools that have formed over hundreds of years due to the shape and direction of the Zambezi. With such an abundance of water, much of the Park consists of forest and low growing vegetation allowing for excellent game viewing and conditions suited for walking safaris. 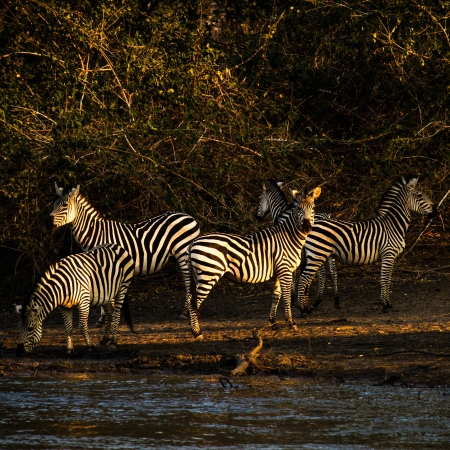 The best time to visit is during the dry season, which lasts from May to October, as the heat intensifies and the water dries up, forcing the wildlife to keep to the few permanent water sources. The game viewing is prolific and sightings are varied, but will consist mainly of plains game (zebra, kudu, eland, impala, and many other antelope species) along with large herds of elephant and buffalo.

With such high numbers around only a few area of water, this will inevitably attract predators, with lions, leopards, wild dog, hyena and cheetah never far away and ready to take down any prey at the slightest hint of weakness.

Game drives in open safari vehicles are offered at each camp, but the Park is most famous for its exceptional walking safaris and canoeing excursions, which allow guest to view the wildlife at a much closer distance.

For those of you who are keen birders, there are some 380 recorded species to be seen here. The best time for birding would be from the end of the rainy season in April, heading into the dry season. African fish eagles are a common sight, perched on branches along the riverbank, as are many species of storks, herons and kingfisher. One of the most colourful birds on the continent, the carmine bee-eater, nests on the banks of the river in the drier months, and there is no better sight than seeing them returning in the evening sunlight.

Due to the rainy season, infrastructure, terrain and general isolation, access to the Park becomes almost impossible, hence why the camps and lodges are seasonal, and will operate only in the dry season.

Because of the distance too, all transfers are done by light aircraft, departing via an international airport such as Victoria Falls or Harare, or from a different Park eg Hwange. Upon arrival you will be met by your safari guide and transferred to either you lodge or camp, which will form part of a game drive… so keep your eyes peeled!

If you are considering a trip to Victoria Falls or Hwange National Park, then Mana Pools is a perfect add-on as it offers a completely different safari experience, along with a range of other wildlife, habitats and activities. This combination is how a true Zimbabwean safari should be.

Zambezi Expeditions is a small luxury mobile camp, set up near the banks of the mighty Zambezi River, and offering one of the best ways to experience Mana Pools. The camp gives 'glamping' a new definition by virtue of its detailed furnishings.

Ruckomechi Camp is a remote and beautiful camp that offers the best of Mana Pools. It consists of 10 spacious tents (including 2 family tents), built on low wooden decks, each of which has a veranda with broad vistas of the river.

John's Camp is a semi-permanent tented camp situated within Mana Pools on the bank of the Zambezi River. Being a small camp, with a maximum of just 12 guests, means that the excellent guiding team can tailor your safari to suit you, providing a highly personalised experience.

Located within a private concession, Kanga Camp is set within a pristine and undeveloped area of Mana Pools, giving you a pure and unspoilt African safari experience.