The Best Times to Visit the Falls

You could argue that there is no ‘bad’ time to visit one of the 7 Wonders of the World, but it is important for visitors to realise that the Falls are not a constant flow of gushing water - the amount of water coming over the edge varies by season and does depend on annual rainfall patterns.

The Falls are at their most spectacular between February and May, when the Zambezi River is at its annual peak flooding time. The cascading water spans the entire 1.7 km width of the Falls, and it is during this period that the misty clouds of spray from the Falls can rise to a height of over 400 meters or even higher, and they are visible from over 30 km away. The noise of the Falls is truly deafening, and it is impossible to see the foot of the Falls and almost any of its rockface, as the amount of water surging down is so great...it is totally mesmorising to watch. 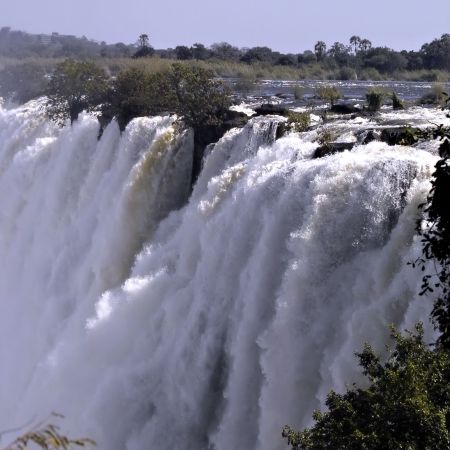 Walks along the paths will result in you getting very wet, so waterproofs or ponchos are recommended - and do protect your camera and video equipment too from the spray otherwise you won’t have any photos or footage to show friends and family when you get home! Daytime thundershowers are also commonplace - another reason to take waterproofs with you!

This is a fantastic time to take a ‘Flight of Angels’ over the Falls, as from the air you can really appreciate the vastness and sheer magniture and beauty of the Falls at this time of year.

The lowest water flow over the Falls occurs between October and December, and in some parts of the Falls (namely on the Zambia side) no water falls at all. However, you can safely enjoy a swim in the Devil’s Pool during this time, or walk to the bottom of the First Gorge at the Zimbabwean side. August through to December are also the best/only months to go white water rafting, as this activity is not run when the river is in full flood.

Between July and September is one of the most popular times to visit the Falls, mainly because a lot of people combine a trip to Victoria Falls with a safari in the Kruger Park in South Africa, as these months are the best for game viewing there. The Falls are gradually moving between high flood season and low water flow, so the mist and the noise are not so overwhelming.

Finally, regarding the actual weather you can expect throughout the year - it is extremely hot between September through to April in the summer months, and from November through April it also wet, as this is the rainy season. Average highs are between 32-34°C (90-93°F) and average lows are between 15-19°C (59-66°F). The winter months between May and August are mild, with average high temperatures ranging from 25-27°C (77-81°F) and average lows between 7-10°C (45-50°F).