In the Beginning, the Warthog was the most handsome animal.  He knew this, and unfortunately became very vain. As a result, none of the other animals liked Warthog very much.

One morning, Warthog left his burrow, and wandered off with his tail proudly sticking up in search of food. He passed Porcupine, who had been up all night foraging for food.  Porcupine was extremely tired, and wanted to go to sleep, but he still had a long way to go before he reached his home. Porcupine had an idea.  Why not nip into Warthog's burrow and have a quick nap before Warthog returned?  So Porcupine went down the burrow and promptly fell asleep. 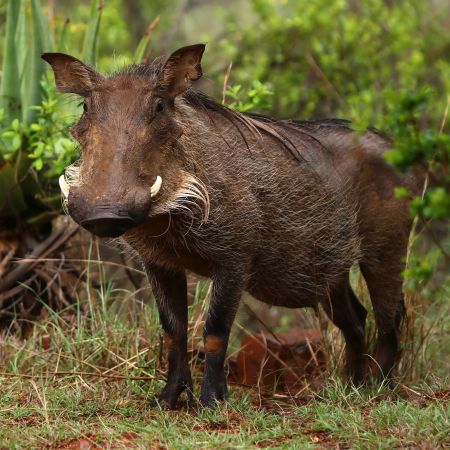 Meantime, Warthog found a waterhole, and wallowed in the mud, and then found some good grass to graze on.

Nearby, lying under a tree, was Lion.  Warthog couldn't resist showing off how handsome he was, all covered in mud. Lion was in a particularly bad mood this morning, and having the Warthog parade around him was just too much to bear.  With a great roar he charged Warthog. Warthog, realising that he had pushed Lion too far this time, panicked, and ran as fast as he could back towards his burrow, with the angry Lion very close behind. Warthog ran headfirst straight into his burrow, knowing that Lion could not follow him in.   Lion stopped outside the burrow entrance and roared angrily.

Porcupine, who had been sleeping soundly, awoke with a start. Thinking that he was being attacked, he stood up and spread his quills ready to fend off anyone. Warthog was running so fast into his burrow, he was unable to slow down when he saw Porcupine, and ran straight into him. Warthog cried out in pain, because many quills became stuck in his face and nose.In haste, Warthog backed quickly out of the burrow again.

Lion, seeing the Warthog coming out with a face full of quills, laughed gleefully. "Serves you right," said Lion.  "That will teach you to be so vain." When the other animals heard what had happened to Warthog, they all came to laugh too, and no one helped to pull out the quills. Poor Warthog's face swelled up, and his once handsome features disappeared. He was very upset, but realised that he had learnt a hard lesson for being so vain.  And still, to this day, the Warthog is still ugly - and also always enters his burrow backwards - just in case.

Facts about the Warthog