In The Beginning, Man struck a deal with The Creator that he would not die.  Instead, when he got old, The Creator would send down a new skin for Man to put on, which would make him young again. 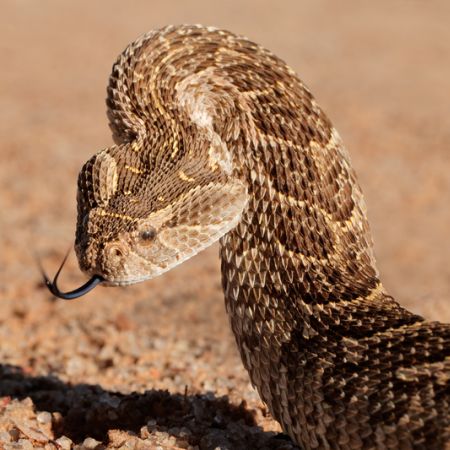 At last The Creator finished the skins, and put them in a basket and asked Jackal to deliver it to Man. On the way to the village, Jackal stopped for a meal.  He ate so much he felt very tired afterwards, so lay down to rest a while before continuing on his journey. After a short while, Snake slithered past.  Snake stopped and asked Jackal what was in the basket.   Jackal told him about delivering the new skins to Man. Snake liked the idea of living forever, and wanted the skins for himself.  He offered to look after the basket while Jackal had a little sleep.  Jackal thanked Snake, and promptly fell asleep.

When Snake was sure that Jackal was sleeping soundly, he took the basket of skins and disappeared into the bush.When Jackal awoke, he was distraught to realise that he had been betrayed.  He rushed to the village and told Man what had happened. Man was annoyed with Jackal for being so careless, but was not duly concerned as he thought The Creator would simply make him some more skins.

However, The Creator was angry at the way Man had treated him, so refused to make any more skins.  Man therefore had to die when he became old.  Man blamed Jackal for this, and chased him away from the village. The Creator was also angry with Snake for being so cunning, so took away the magic power from the skins, leaving them just as ordinary skins with no ability to prolong life.

To this day, Man still hates Jackals and Snakes, but Snakes still have the basket of skins so that they can change their old skins for new ones whenever they want.

Facts about the Puff Adder

Facts about the Black Backed Jackal