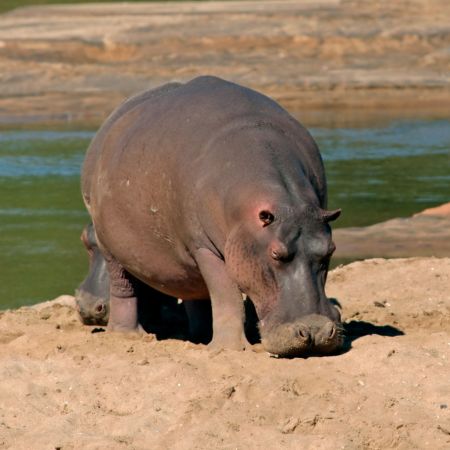 When The Creator made all the animals, he forgot about the Hippo, so had to make the Hippo out of all the remaining animal parts.  Hippo hated the way he looked, and was too embarrassed to live on the land.

He begged The Creator to let him live in the water, where he could hide away. The Creator refused, because he thought that Hippo, with his large mouth and teeth, would eat all the fish.

Hippo promised that he would not eat any fish, and would only eat grass, but would only come out of the water at night to eat because he didn't want the other animals to see him.

Again, The Creator refused permission for Hippo to live in the water, because he still did not believe that Hippo would not eat the fish.

Hippo was very upset, and determined to have his way.  Every day, he bombarded The Creator with the same request, until finally The Creator was tired of hearing from Hippo.

The Creator gave Hippo permission to live in the water, but on the condition that every day, when the Hippo came out of the water to feed, he scattered his dung on the land, so that The Creator could examine it to make sure that it contained no fish bones.

To this day, Hippos still live in water, and come out onto the land at night to graze and scatter their dung.

Facts about the Hippo