The Creator originally made all the animals the same.  After a while, the animals became bored with all looking alike, and asked if The Creator could do something to help them. The Creator agreed to help, and spent weeks making many coats and horns of varying styles, shapes and sizes so that the animals could put them on and look different. 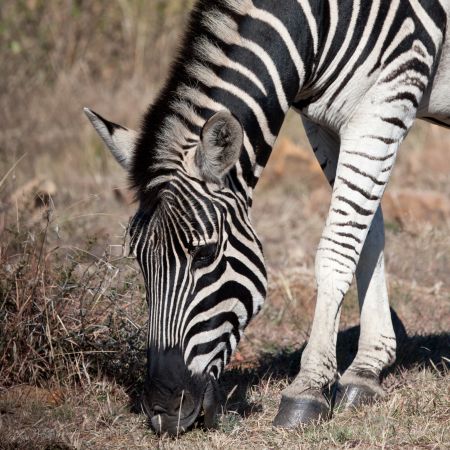 When The Creator had finished his work, he invited the animals to come along and choose what they would like. The animals were very excited, and all eagerly rushed off. All except the fat Zebra, who was too busy eating his dinner.  Zebra was well-known for his love of food, and nothing would come between him and his mealtimes.

When Zebra had eventually finished eating, he was extremely full, so wandered slowly along to see The Creator.  He passed many of the other animals on their way back home, and was surprised at how different they all looked now.

Elephant had chosen a plain grey coat, but had a magnificent pair of tusks to set the outfit off. Lion had chosen a lovely sleek coat with a fine mane of hair around his neck.Rhino, being a bit short-sighted, had chosen a coat that was a bit too big for him, so it looked baggy, and the 2 horns he had picked out were different sizes.Zebra quickened his pace, his mind going over what sort of coat and horns he would like.

However, when he eventually arrived at The Creator, he was dismayed to find that there was only one coat left, and no horns at all. The coat was a rather garish black and white striped one but as there was nothing else to choose from, the Zebra had to take it.

To this day, Zebras are still wearing their black and white coats, and you will very rarely see a thin Zebra because they are still always hungry and eating.