Why there are dark stripes down a cheetah's face

One day, a hunter left his village to go and find food for his family.  He passed a small clearing, and noticed a young Impala who had strayed away from the main herd. While the hunter was working out the best way to catch the Impala, he noticed a mother Cheetah in the long grass near the Impala. Suddenly, the Cheetah leapt out of the grass and with great speed bore down and caught the Impala before it had a chance to run away. 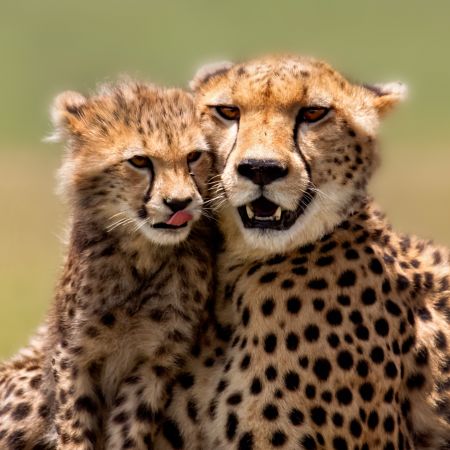 The hunter marvelled at the Cheetah's hunting ability, and wished that he could have a Cheetah to train to catch food for him. Suddenly, he noticed her 3 young cubs sitting nearby in the shade of a tree, watching their mother kill the Impala for their dinner.

"This could be the answer," thought the hunter.  "Why don't I steal one of the cubs and take it back to the village with me, so that I can train it to hunt for me instead." Quick as a flash, the hunter ran over to the cubs, and picked up the nearest one. "Why not take all 3," he then thought. "That way, I'll be able to catch 3 times as much food for my family."  The hunter scooped all 3 cubs into his bag, and ran off.

The mother Cheetah dragged her kill back to where she had left her cubs, and was distraught to see that they had gone. She cried and cried for hours, and the tears made a dark stain down her cheeks.

An old man passed by and asked what was wrong.  When he heard that the cubs were missing, he realised that the 3 cubs that had been brought into his village that morning by the hunter must belong to the mother Cheetah. He promised to return the cubs to her immediately, and went to the village. The old man scolded the hunter for not only stealing the cubs, but for dishonouring the tribe's hunting traditions of using their own abilities and skills.

When the cubs were returned to their mother, she was very grateful, but the hours of crying meant that her face was permanently stained with the dark stripes.

Facts about the Cheetah