Why The Rhino Is Bad-Tempered

Jealous of his friend, the Giraffe 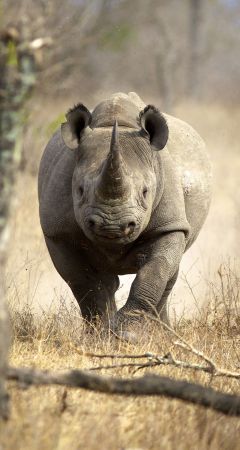 One year, there was a terrible drought. All the waterholes dried up, and all the grass became very parched and bitter tasting. All the animals were extremely hungry.

Giraffe realised that the leaves on the tree tops were still fresh and tasty, and he tried to stretch his neck upwards to reach them, but couldn't. His friend, Rhino, seeing his friend try this, laughed at how silly he looked.

Giraffe was annoyed at being laughed at, and stormed off into the bush.

He passed an old man who asked why Giraffe was so angry. Giraffe told him. "Never mind," said the old man.  "I am a witchdoctor, and I have a special herb here which will make your friend Rhino regret laughing at you."

He gave the herb to Giraffe, who ate it quickly. Suddenly, Giraffe had the strangest feeling. His neck was getting longer!

He felt very dizzy as the ground started to get further and further away, and closed his eyes.

When he reopened them, he could see the lucious leaves at the top of the trees were level with his head, and he eagerly began to eat them.

When Rhino heard what had happened to his friend, he became very bad-tempered, and to this day, the Rhino is still in a bad mood.