One of the more beautiful bird species, there are several different kingfishers that you may see while on safari in Africa.

Striking in its plumage, the brightly coloured Malachite kingfisher is found along riverbanks and amongst reeds. Its predominent colour is a metallic blue on the head and along the back, an orange and cream coloured breast/body, and the legs are a bright red. It hunts fish, frogs and small insects, and will beat its prey against a branch to kill it. Fish are always swallowed head first.  They are solitary birds, apart from during the breeding season. 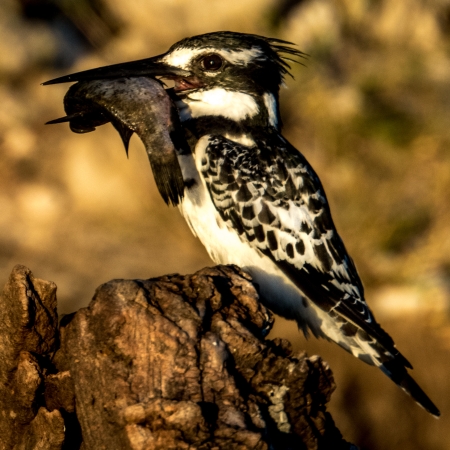 It is easy to identify this kingfisher by its bold black and white feathers. It will hover gracefully above the water before diving quickly in to catch its prey - they feed off fish

The smallest kingfisher species, the pygmy kingfisher, or miniature kingfisher as it is sometimes referred to, is only 12 cm long, and is the smallest member of the kingfisher family. It is distinctive, not only by its size, but also by its bright blue crown with a purple wash along on the side of its head. Its underparts are a brilliant orange, and its bill and feet a red colour.

Unlike other members of its family, the pygmy kingfisher does not eat fish. Although it does hunt from a perch, like other family members, its main diet consists of insects, but it will also take small lizards or frogs if the opportunity arises. Despite its size, it can dispense with a lizard or a frog quite quickly, simply by taking it in its mouth, and continually hitting it against a stone or tree stump until the prey is dead.

It can be found in a variety of habitats, including coastal bush and woodland.   They breed between October and December, and will make their nest in an old tunnel or burrow on a bank.  3 to 6 eggs are normally laid in the nest.