Facts about the Ostrich

The ostrich is the world's largest living bird, weighing up to 180kg and standing as tall as 2.5m. 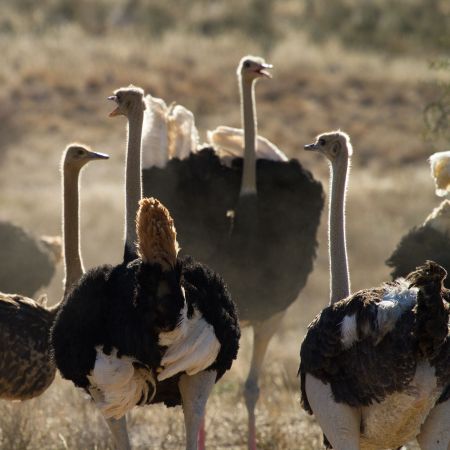 Although flightless, they can escape potential danger by running, and can reach speeds of up to 65 km/h, which they can sustain for an impressive 30 minutes.

Their powerful legs can also deliver a heavy kick should the need arise.

Despite popular belief, the ostrich DOES NOT nor CANNOT put its head in the sand to avoid detection. Instead, they lie on the ground with their necks outstretched, which can give the appearance of having 'lost' their head.

Where to Find an Ostrich

They live in mixed flocks of between 5 and 50, and can often be seen next to other grazing plains animals such as antelope or zebra.

The ostrich is today found only in the sandy, drier regions of Africa.

Up until 1941, ostriches were also found in Syria and Arabia, but due to excessive hunting for their meat and feathers, they are now extinct in these 2 continents.

Despite the extensive hunting which also took place in Africa, the practise of ostrich farming has helped to secure the ostrich population, and the ostrich is fortunately not on the endangered animal list.

The Vast Proportions of An Ostrich Egg

Each egg weights about 1.5kg, and is on average 15cm long.  It takes around 40 days to hatch. One ostrich egg is roughly the equivalent size to 24 chicken eggs.

Ostriches eat mostly plants, but occasionally will eat locusts or dead animal remains left by other predators.  They can survive without water for long periods of time.

Also known as the blue-necked ostrich, this separate ostrich species is found in northern Kenya and forms part of the Samburu Special Five - a diverse group of wildlife species found only in this particular area of Kenya.