Facts about the Cheetah

The fastest moving animal on the planet

Cheetahs are easily distinguishable by the small round spots on their coat and the dark 'tear' stains running down their cheeks.

They have an extremely slender build, and a long tail which acts as a 'rudder' to steady them while they are running and swerving - and as a cheetah can accelerate to speeds of up to 110km/h, this make it the fastest mammal on earth. 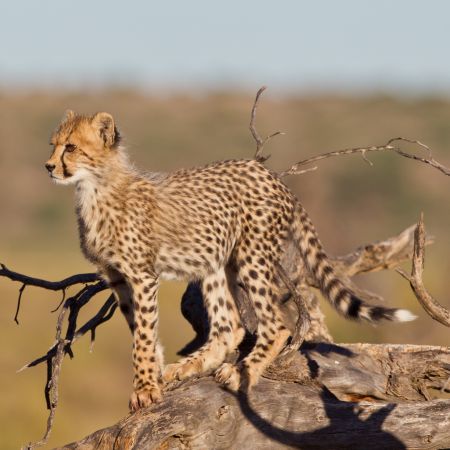 Their speed and agility makes it easy for them to prey on fleet-footed impala and other smaller antelope.

However, the cheetah can only sustain speeds like this for a relatively short distance - about 300m. If the cheetah fails to catch its prey within this distance, its temperature soars, its breathing rate increases dramatically, and it has to rest for about half an hour before it can try again.

Because the cheetah lacks the stamina to maintain the high speeds needed for a long distance chase, they tend to use the cover of woodland or long grass to get close enough to its prey before rushing out into the open and sprinting at full speed towards a selected quarry.

As a result, cheetahs are mainly active during the early morning and twilight hours - they need to be able to see any obstacles when accelerating to such high speeds, but also need the poorer light for added coverage.

When caught, the prey is brought down by a strike to the back or hind leg, quickly followed by a fatal strangulation hold on the neck. The kill is quickly dragged back into the cover of the bush to prevent it from being taken by scavengers. 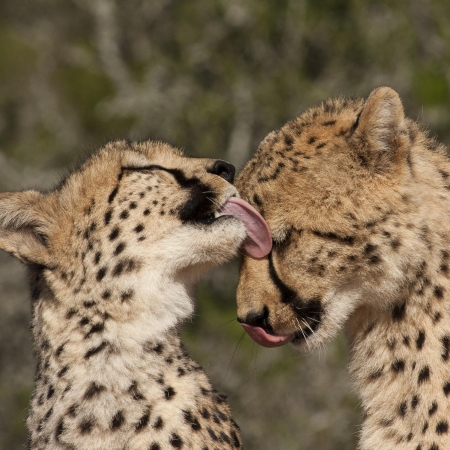 Although their slight build is excellent for acquiring great speeds, they are not built for confrontations with other predators. They are easily intimidated by lions and hyenas, and will readily surrender a kill if approached or threatened.

Vultures also are able to give them a hard time at a kill - mainly because cheetahs knows that vultures will attract other predators and wants to avoid a conflict.

They form a close-knit family group, and the mother will patiently teach the cubs how to hunt, bringing back baby fawns and letting the cubs try to catch them, before intervening if needed.

When about 2 years old, the siblings will leave their mother, and will tend to go off and form a group together for a while.

Females give birth to up to 4 cubs, and will carefully hide the cubs until they are at least 3 months old, often moving to new hiding places to avoid detection by predators such as eagles.