Three species are found in Southern and East Africa

There are 3 species of zebra found in Southern and East Africa.  The Plain's or Burchell's Zebra is the more common, and is identified by its stripes which extend under its belly, and the paler 'shadow' stripes on its rump.   The Mountain Zebra has much bolder stripes on its legs, and does not have any shadow stripes.  It also has a small dewlap under its chin. The Grevy's Zebra is only found in Northern Kenya, and is the largest of the 3 species. It has narrow stripes and there are only an estimated 2,000 of them left in the wild today. 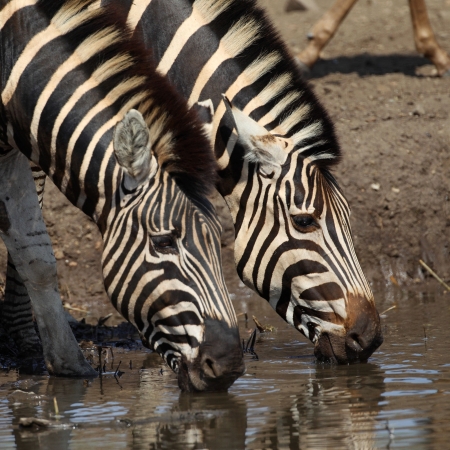 Zebras are grazers, and can be seen equally happily grazing in short or long savanna.  The zebra is often the first of the animals to lead the way into taller grassland, and prepares it for the more sensitive grazers such as wildebeest and other antelope species.

They are extremely water dependent animals, so will normally be found near to a ready water supply. A healthy zebra can be identified by its mane, which will stand proud and erect.

The Different Types of Zebra Herds

It is extremely common to see small herds of zebra.  These consist of either only one stallion and  his 'harem' of females, or herds of only stallions - also known as 'bachelor' herds.

Bachelor herds can be up to 15, and are normally made up of young adolescent stallions.

They live together, often play fighting with each other, until they are about 5 years old.

Then, they are ready to go off in search of their own harem, or to take over another stallion's existing harem.

How to Tell your Zebras Apart...

Although all zebras may look alike to the untrained eye, each one does have its own individual stripe markings.

It is common to see a zebra with stripes that do not match, which is where it has escaped the claws of a lion and been badly scratched along its rump. When the skin heals, the stripes no longer quite match or are slightly crooked.

Active only during the day, at night zebras rest and sleep lying down, with at least one herd member standing guard against predators such as lions, wild dog or hyena.

When threatened by predators, the whole herd will group tightly together and present a united 'front'.

The entire herd will jointly protect the young and any sick or injured group members.

A stallion will actively defend his harem against predators, and will not hesitate to attack smaller predators such as hyenas or wild dog. 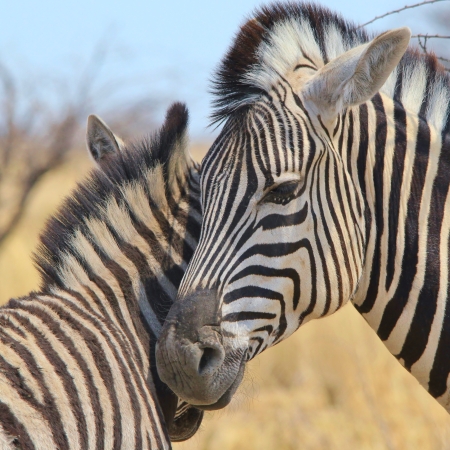 Although breeding is not seasonal, zebras will usually mate during the first few months of the rainy season.

Other females in the harem can react jealously to a female in estrous, and have been known to threaten her and even chase her out of the herd.

After the foal is born, the mother is extremely protective of it for the first few days and will chase away other herd members.

Any previous offspring is normally rejected, but it may later establish a bond with its sibling through mutual grooming.

For a stallion to collect his harem, he must either entice a female from another harem, or encourage an adolescent female to leave her family unit.

The new stallion has to demonstrate that he is a fit and worthy conquestor, and normally will fight the herd stallion for the right to take the female.  Fighting zebras mainly kick and bite, and it is not uncommon for a zebra to have its tail bitten off during a particularly vicious bout.

There is a strict hierarchy within the harem amongst the females, and new members can find themselves the victim of hostility from existing mares for several weeks.