The tallest animal in the world

The tallest mammal in the world, an adult male giraffe can reach up to 5.5m tall, and an adult female 5m.  Both male and female have horns, but the males horns are thicker and bald on the top, whereas the females are thinner and tufted on the top. Each giraffe has its own individual marking pattern, and males tend also to be darker in colouring than females. 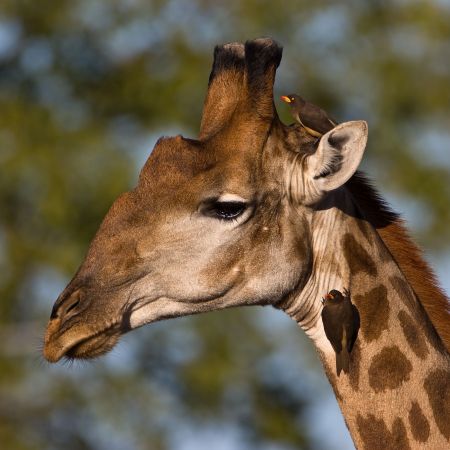 A giraffe has just 2 gaits - a walk and a gallop. Their ambling walk is similar to that of a camel's, in that their entire weight is supported alternately on the left and then the right legs. When galloping, they can reach top speeds of 60 km/h, and their fore legs and hind legs work together in pairs.

The Long Neck of the Giraffe

The giraffe has only 7 vertebrae in its long neck, and powerful muscles pump the blood up the long neck to its brain.

The blood pressure in a giraffe's brain is at a different level to that of the rest of its body, and as a result, a giraffe can only keep its head down for 25 seconds. Any longer would alter the blood pressure balance and be extremely dangerous to the giraffe's life.

Male giraffes also use their necks as a powerful tool when fighting each other. Before the contest begins, they slowly 'size' each other up by rubbing heads and necks, and twining necks or leaning into one another, to assess each other's weight. A lot of thought seems to go into this process, as they pause and gaze into the distance before submitting the first blow. They use their necks to gain momentum, and swing them round in an arc, thus using their heads as a battering ram to connect with their opponent's flanks, rump or neck.The rare hard blow that lands solidly can down an opponent.   As a male's head gains weight with age, the older the challenger, the more heavier the blows. 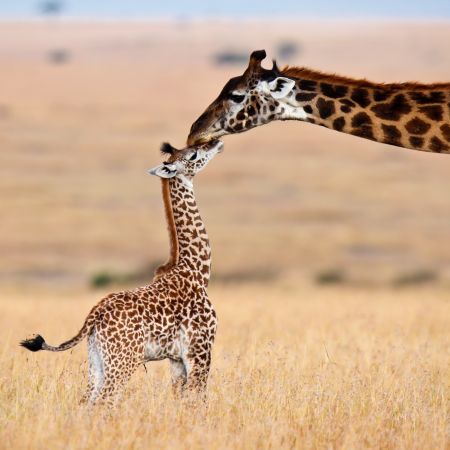 Giraffe and their Young

Calves are born year round, after a gestation period of around 14 months.  The female remains standing to give birth, so the new born calf literally has to drop about 2m to the ground. The calf can stand up within 15 minutes, and during the first 2 weeks is closely guarded by its mother.  After that, a mother may hide her calf while she goes further away to browse and drink, but will always return to the calf at night fall.

Over 50% of calves fall prey to lions and spotted hyenas in their first few months, despite hiding and their mother's determined defence. As adults are too big to be regular prey, a mother will stand over and defend her calf against lions, which run the risk of being kicked to death if they get within striking distance.

Maternity groups of females watching over calves in a crèche are also common, allowing the mother to go further away and for longer periods to find food and water.

Although giraffes are nutritionally independent at 16 months, the maternal bond lasts up to 22 months. Males remain with the herd until they are about 3 years, after which they go off to join bachelor herds. 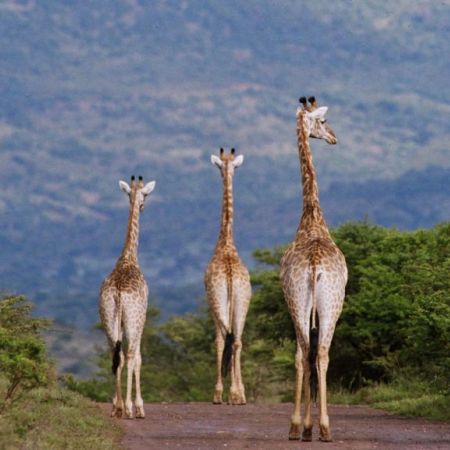 They are not territorial animals, and live together in 'unstable' or loose feeding herds, meaning that herd members will stay for a while, then leave to find another herd to feed with. There is no defined leader in the herd, and at any given time the herd could compose of all male, all female, mixed or just 2 giraffes! Giraffes very rarely cluster together, unless they happen to be attracted to the same tree, or lions are present. Even when resting, herd members stay a good distance away from each other.

The Diet of a Giraffe

Females spend at least 50% of their day browsing, and males a bit less.  Most of the browsing is done during the day, with the night time spent lying down and ruminating. Giraffes have an exceptionally long tongue (about 45cm), which they use to great effect as a tool to strip the nutritious leaves off twigs and branches. One of their favourite trees is the acacia tree, and the sharp spikes have seemingly little or no effect on the giraffe's ability to browse from these trees.

They need to drink every 2 to 3 days, but also take in a lot of their moisture from the leaves themselves.  When drinking, a giraffe will either straddle or bend its forelegs - a most ungainly pose!