Africa is home to many species of vulture

There are many species of vulture that you may see on a game drive. They can often be seen circling in the sky,  riding on the thermal currents and constantly on the look out for a fresh kill. Their incredibly sharp eyesight means that they can spot a carcass up to 4 miles away. 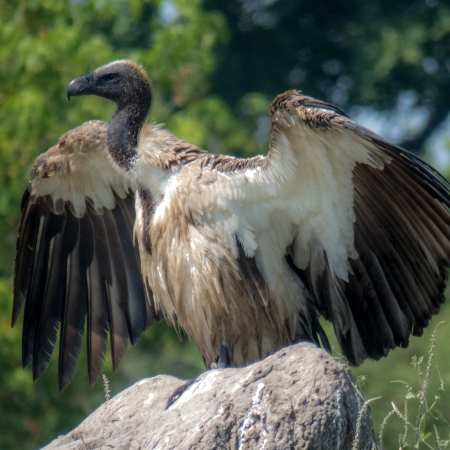 Vultures are out and out scavengers. Their strong beaks are perfect for ripping into dead flesh, but their claws and feet are not really built for catching their own prey.

If there is a dead carcass somewhere around, the vultures will patiently bide their time until the predator has left and they can swoop in and finish up the leftovers. A group of vultures feeding together on a carcass is known as a wake. It is not uncommon to see different vultures gathering together at such a feast.

One of the more common vulture species, the white backed vulture has a wing span which can reach up to 7.5 feet. The wings are white on top, and it also has a white neck and a white backside that can be seen when flying.

Their beak is relatively weak, so they have to wait for any tough skin to be broken first before they can eat the softer flesh.

They are monogamous, and breed once a year, and the female will lay one egg. Both parents take it in turn to incubate the egg, which hatches after about 2 months.  The fledgling vulture will be ready to leave the family nest at about 4 months old.

The lappet faced vulture is one of the largest vultures, about 1.15m tall and with a wingspan of over 2.5m.  They can live up to 40 years, and are usually solitary birds or live in pairs.  The name 'lappet' comes from the large, fleshy, ear-like folds or 'lappets' on the side of the face. 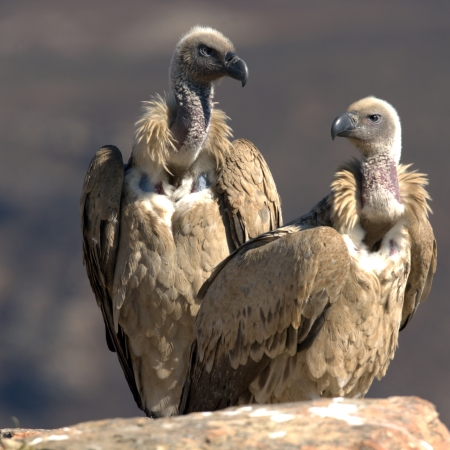 They make their nests at the top of trees, normally thorn trees. The nest is constructed of sticks, and lined with grass and fur from carcasses. Only one egg is laid.

They tend to be one of the first to arrive at a dead carcass, as they are the only vultures strong enough to  through the dead animals hide with their powerful hooked bill. Their size also intimidates other vultures into letting them feed off the carcass first.

Their distinctive bald red head and neck have evolved to save having to preen blood off their feathers after having plunged deep into a dead carcass.

A heavy vulture that can weigh as much as 9.5 kg, the Cape vulture roosts and nests in cliff areas. They are classed now as endangered, as their numbers are rapidly declining.

This is one of the smallest vulture species, weighing in at just 2 kg. They are often the last to leave the carcass, as their slender bill enables them to get into the smaller areas such as eye sockets and inbetween ribs that the other vultures cannot access as easily.