Not just a rugby team but an antelope species too!

The springbok has a distinctive cinnamon coloured coat with a white underbelly, and a dark brown stripe along both sides. Both male and females have horns, but the females horns are much shorter.  The tips of the springbok's horns curve inwards at the top, giving them an almost 'heart-shaped' appearance.

When fighting, springboks will lock their horns, sometimes becoming inextricably bound together, which leads to vehement circling with severe jerking and twisting to try to disentangle each other. 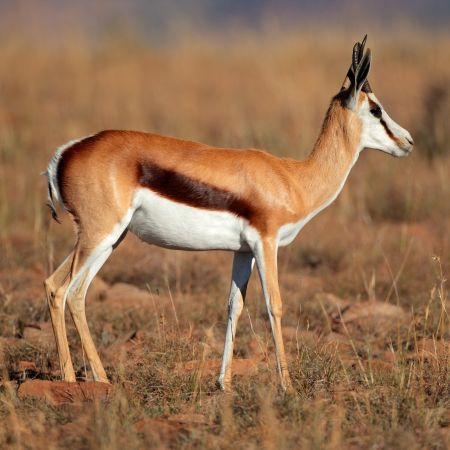 Their numbers have been greatly reduced in South Africa in the last century, and today they are more commonly found in Namibia and northern Botswana.

Springbok are also extremely fast, and can reach speeds of over 85km/h to escape predators such as wild dog, lions, cheetah or jackals.

Pronking is also often used by adult springbok as a form of self-defence to make themselves appear larger when under threat.  It involves an odd looking jump into the air, with the back bowed, tail clamped down, neck bowed and legs extremely straight.

Springbok live in either female herds, or in separate bachelor herds. Fawns are born in the rainy season, and form separate 'crèches' with their mothers for several weeks before rejoining the main herd.

Female offspring remain attached to their mothers until they themselves calf, but males of 6 months are relegated to bachelor herds, the separation often coinciding with the birth of their mother's next offspring.

Only during migration to greener pastures, or during the mating season, will the herds become mixed.

Springbok are grazers and browsers, and prefer open grasslands to woodland or rocky areas.

They can go for indefinite periods of time without drinking, provided their food contains sufficient water in the leaves and shoots.