Hyenas are not members of the dog or cat families, however. Instead, they are so unique that they have a family all their own, Hyaenidae.

They are one of the noisiest animals in the bush, and their distinctive whooping can often be heard, especially at night.  Their eerie call begins low, rising sharply to a high pitched scream.

As big as a large, powerfully-built dog, the spotted hyena has a large broad head, short pale brown-grey wiry coat scattered with dark spots, rounded ears, and its slanting back is a result of its extremely powerful forequarters. 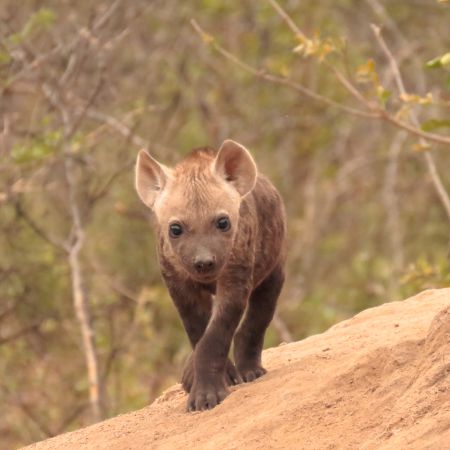 African tribes people are highly superstitious about spotted hyenas. Some believe that they are closely associated with witches, who ride on a hyena at night, and turn into one to perform evil tasks. Others believe that their tail, whiskers and ears have special properties, so they are highly valued by witchdoctors,

Cubs are born throughout the year, and the normal litter size is 2. The female will give birth in a disused den, where the cubs stay for the first 2 weeks, before being moved to the communal den.

Cubs are almost black in colour when young, and develop their spots at a later age. The females in the clan have to protect the young cubs from the males, who have been known to eat them if they are left unprotected. Males disperse before reaching maturity, but female offspring will stay with the clan for life.

Hunting Habits of a Spotted Hyena

They are mostly found around open savanna habitat, and are mainly late afternoon and nocturnal hunters, preferring to rest in the den or shade during the hotter hours of the day. They have extremely well developed senses of smell and hearing, and excellent night vision.  During a night time hunt, they can travel up to 80 km, moving at a steady walk or easy trot. 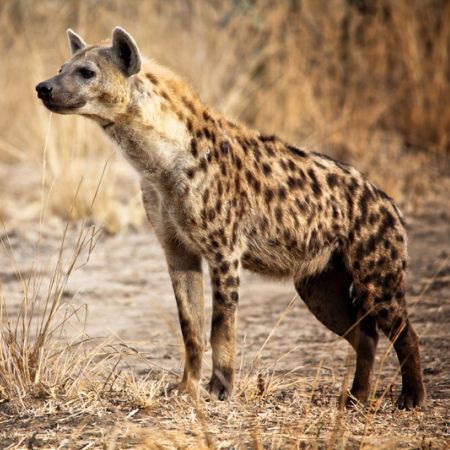 They prefer to feed on the remains of carcasses rather than catch a fresh kill, which is undertaken only as a last resort when desperate for food, despite being extremely fast.

If they have to, they can reach speeds of up to 50 km when chasing a prey, and they can maintain this speed for a distance of up to 5 km. Amazingly, they have learnt to follow vehicles, especially in private game reserves, as they associate the vehicles with larger predators such as lion and leopard, which represent possible scavenging opportunities.

Their especially powerful jaws and teeth mean that they can eat the bones, pieces of horn and even hooves left by other carnivores, although later on undigested food (mainly hair, horn and hooves) is regorged.

Their droppings are normally pure white, as a result of the amount of calcium consumed in their diet. If they do stir themselves and catch a fresh kill, the clan will waste little time in devouring the carcass.

They are highly sociable animals, and live in communal dens in territorial clans of an average of 12 members, although clans can reach up to 80 in size. As the female is the larger of the species, the clan is matriarchal, and the adult males are dominated by the adult females. 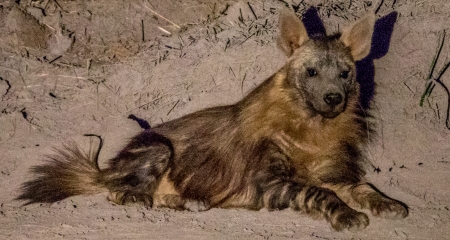 With a shaggy long brown coat, the brown hyena looks completely different from its spotty cousin. When challenged, their fur will rise, making them look very intimidating.

They are normally solitary animals, and will travel up to 35 km per night in search of food.

The brown hyena will feed on dead carcasses, but is not adverse to catching its own prey such as springbok, bat eared foxes, and spring hares.