The 'Fast Food' of the African Bush

The impala is an exceptionally graceful antelope, and has a distinctive 2 tone coat.  The back is a rich reddy-brown colour, and the underbelly a paler cream. Only the males have horns.

The rare black-faced impala, found only in northern Namibia, has a black stripe down the middle of its face. 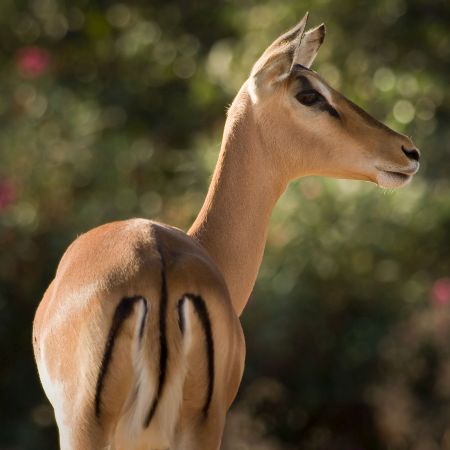 All impala, both male and female, have a conspicuous black 'M' shaped mark on their white backside - prompting the joke that they are the 'McDonald's fast food for lions'.

Their tail is always down between their hind legs, which give them the appearance of being extremely timid and nervous. In most National Parks, however, they have become extremely accustomed to vehicles, and will not move far away if you pull up alongside them, giving a great opportunity to watch them at extremely close quarters.

The Impala - the unfortunate Prey

Cheetahs are their main predators during the day, so impala tend to be found grazing and browsing in woodland areas which is difficult terrain for cheetahs to hunt in.

At night, their main predators are lion and leopard, so impalas move into open areas so that any predators can be more easily detected. A 'sentry' is appointed who raises the alarm by barking should a predator approach.

Lions in particular have learnt to use slow moving vehicles in game reserves to assist in their stalking of impala, using the noise of the engine to cover the sound of their own movements.

When startled, impalas are known for their impressive leaping, which can be as high as 3m and 12m in length.  The entire herd will all leap together, which serves to confuse any potential predators and acts as a form of defence for the herd members.

The Unique Breeding Behaviour of the Female Impala

Females usually give birth during early Summer, and will leave the main herd to give birth to a single calf in thick bush or tall grass. The young calf is particularly vulnerable to attacks by jackals and pythons, and the long grass gives added protection for the newly-born animal. Female impala also have the remarkable capability to delay giving birth until the first rain arrives, to ensure that their new-born calf has sufficient food to survive on. This delaying tactic can be anything up to 3 weeks. 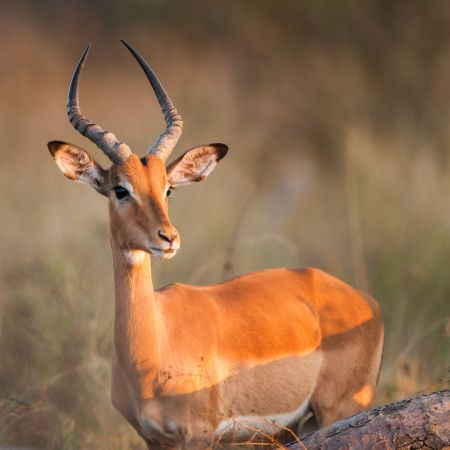 Impalas are both grazers and browsers, and herds of up to 100 impala are common.

The larger herds tend to be made up of only breeding females, with their young offspring.

Young males will leave the breeding herd from the age of about 8 months, and go off in search of a bachelor herd to join. Bachelor herds tend to be much smaller - between 10 and 15 maximum.

Mating takes place during the autumn season, with the peak between full moons. During the mating season, adult males (3 years upwards) will establish their own territories, and form their own herd.

The male will then spend a lot of time keeping his females tightly bunched together, and will constantly be seen herding them together by walking up to any potential strayers, or may even chase any straying females back into the group accompanied by loud snorting and roaring.

A male impala will actively defend his territory, and will chase other males away while uttering loud and violent grunting and snorting sounds. Fighting is also common, and an intense joust with their horns can result in serious injury or even death.

After the mating season, the males relinquish their territories, and return to a bachelor herd.
The Big '5' Predators Plains Game Other Mammals Birds & Reptiles