Are they Ugly or are they cute?

Prominent tusks, facial warts, nearly hairless bodies, and an untidy mop of long straggly hair makes the warthog definately one of nature's less attractive animals in some people's eyes - for others, however, warthogs fall into the 'really cute' category.  Everyone is entitled to their own opinion - who are we to say which view is right or wrong!

The facial warts are actually thickened skin and gristle, and are used primarily for protection when fighting.  Males have 2 pairs of facial warts, females only one pair.

Both sexes have 2 pairs of tusks - the upper sharp tusks in males can grow as long as 60cm, and the lower tusks about 13cm, whereas the female has much smaller tusks.

Warthogs have generally poor eyesight, so rely on their keen sense of smell to find food.   They are omnivores, and will eat grass, roots, bark, berries or even feed off a dead carcass. 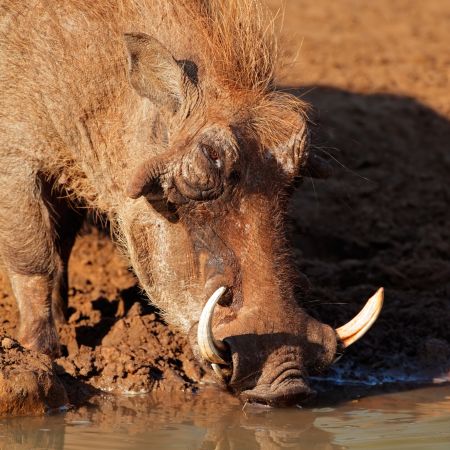 The Odd Habits of a Warthog

When grazing and rooting for bulbs, they will kneel down on their front knees, which are calloused as a form of protection. They are strictly day foraging animals, and also spend part of the day wallowing in mud, especially if it is particularly hot weather.

At night, they retire to burrows, which they enter backwards, using their tusks to defend themselves from any sudden attack.

When they run, they extend their long tail straight up like an antennae, and a group will run in a line one after the other. They can reach up to 48 km/h when running, but have little endurance, so when pursued by a predator, will tend to head for the nearest burrow or hole for protection.

Their main predators are lions, who will sometimes take the trouble to dig the warthog out of his hiding hole. Adult warthogs can reverse direction when being chased into a hole, thereby enabling them to use their tusks as a final defence should the enemy try to follow them down the hole.

They live in family groups of related females and their offspring, and the males live in separate bachelor groups or are solitary. Group members will greet each other with a series of explosive grunts and nose-to-nose contact.  They often groom each other, which consists of one warthog lying still and the other raking their teeth or lips through the other's mane.

Females are seasonal breeders, and give birth normally around October and November. The young are born in a hole, and remain hidden there until they are about 7 weeks old. The mother rarely leaves them during the first few weeks.