Having shot to fame as Zazu in 'The Lion King', everyone on a game drive now knows what a hornbill looks like.

With a dark brown and white mottled body, the hornbill can be most easily identified by its startlingly brightly coloured beak.  Typically on a safari in Africa, you will see yellow-billed hornbills and red-billed hornbills (like Zazu). 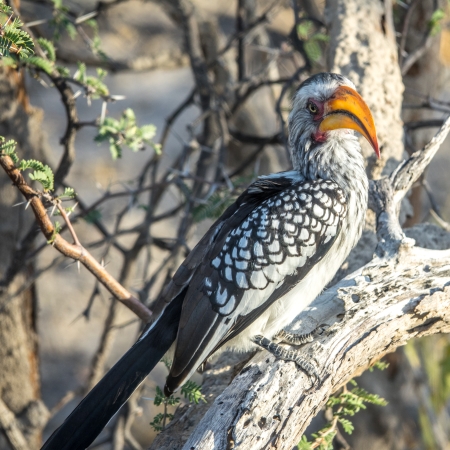 Hornbills feed mainly on the ground, with a staple diet of insects or termites, for which it uses its curved beak to probe inside the termite mound. Both male and female are identical, with the only marked difference being that the female has a smaller beak than the male.

They are mainly found in acacia woodland areas, and are extremely sociable birds, frequently living in groups of up to 12 members.  If one group member starts calling, the call (a hollow sounding clucking noise) is often taken up by all the members of the group.

Females breed between September to March, and will lay between 2 to 5 eggs.  The female will seal herself up in a hole in a tree prior to laying the eggs, and will shed all her feathers once fully sealed up.

She relies solely on the male partner to bring her food while she incubates the eggs, which is about 24 days, and will only leave the nest once the hatchlings are half-grown.

The young fledglings leave the parental nest after about 45 days. When courting, the male yellow hornbill will lower his head and fan out his wings, while calling to attract females.