Easily identified by the white circle on their backsides

Waterbuck are one of the heaviest antelopes, and have an almost 'donkey' like appearance, with a stocky body and shaggy grey-brown coat, and with a distinctive white circle on their backsides.

Their coat emits a musky-smelling excretion thought to be for waterproofing.

Only the males have horns, which are prominently ringed and curved forward. The horns can grow as long as 40cm.  As added protection against these extremely sharp horns when fighting each other, the males have an exceptionally thick skin layer (about 2cm thick) over their neck and shoulders. 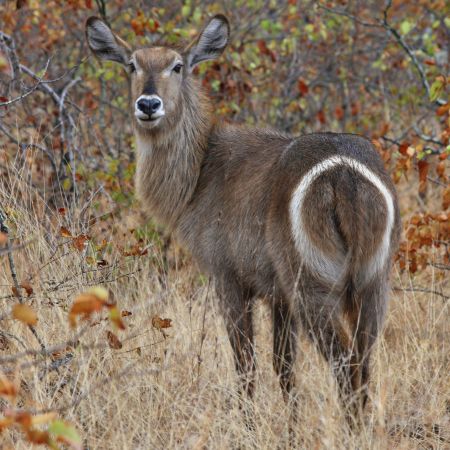 Where to find Waterbuck

They are grazers, and also extremely water-dependant, so the waterbuck is most commonly found within grassland habitat only a few kilometres away from water.

Like most grazers, waterbucks tend to take most of their food early in the morning or late afternoon, and spend the rest of the day resting and ruminating, interspersed with the odd small feeding session.

Fairly slow-moving because of their bulk, they often fall prey to lions, hyenas and crocodiles. When threatened, they will hide in reeds, or retreat into the water and completely submerge themselves up to their nose.

Newborn calves normally take about 30 minutes to stand up, so the mother will give birth in dense thicket for added protection against predators for her newborn calf.

Young calves have the tendency to wander away from their mothers, so often fall prey to hyenas.

Young males leave their mothers when their horns start to appear (usually at 8 - 9 months of age), and will go off to form their own bachelor herd.