The second largest land animal in the world

After the elephant, the hippopotamus is the heaviest land animal, and a fully grown male adult can weigh up to 3,200 kg.  During the day, a common sighting of hippos is of them half-submerged in lakes or rivers. Because their thin skin has no sweat glands, a hippo out of water in particularly hot weather can risk rapid overheating and dehydration. 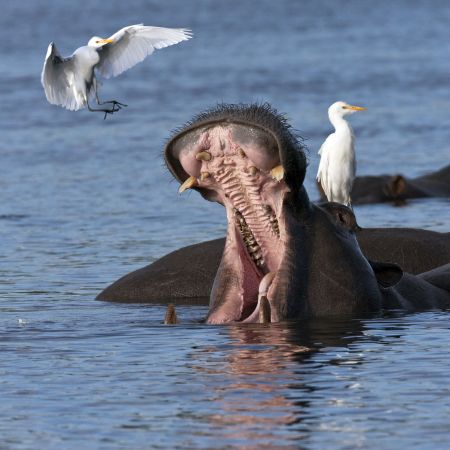 Adult hippos can submerge themselves completely under water for up to 5 minutes by closing their nostrils and ears, but on average surface every minute and a half.  Young hippo calves can only stay submerged for 20 - 40 seconds.

Mature bulls are territorial when it comes to mating grounds, and will control large stretches of river or lake shores. However, they will tolerate other males in their territory as long as they do not approach any females. If they do, then they are driven out with great ferocity.

Females give birth to a single calf during the rainy season, and a new born hippo weighs on average between 25 and 55kg.

They are highly gregarious animals, and live in herds of normally between 10 and 15. They are incredibly aggressive, especially during the dry season when living conditions are more crowded, and serious injuries and even death are not uncommon amongst the group.

Their large mouth is used as an expression of dominance or as a defence mechanism, and the wider the 'yawn', the more threatening the hippo is.

A bull adult's canine teeth can grow up to 40cm long, and their powerful jaws can bite a 3m crocodile in half..

The Night Time Activities of a Hippo

They emerge from the water mainly at night to graze, and can travel up to 10km before returning to the water before dawn. They only consume about 1% of their total body weight in food, and feed rapidly, intently and extremely noisily. Their broad lips enable them to graze on short grass, which is preferred to longer, coarser grasslands.

Although they may look incredibly bulky and clumsy out of the water, they can gallop at 30 km/h in an emergency.