The most dangerous member of the Big 5

Buffalo live together in large mixed herds, and are mostly active during the day, spend most of their time grazing, resting, moving on to new grassland, or wallowing in waterholes. Wallowing serves to both regulate their body temperature and remove unwanted ticks.

Their large droopy ears can give the buffalo a rather comical expression, but they are not an animal to be trifled with. Buffalo can be incredibly aggressive animals when provoked or threatened and are actually the most dangerous member of the Big 5, as they will charge without giving any warning signals. Their steely stare when you approach them in a game viewing vehicle is unnerving, to say the least, which has given rise to their nickname of 'the mafia'. 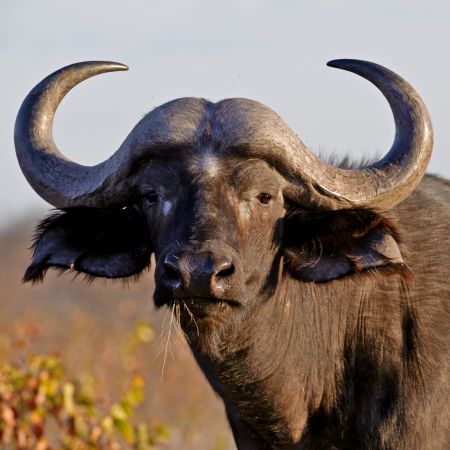 A herd has also been known to mob an attacking pride of lions in order to protect another herd member or small calf from danger.

A herd can travel over 15 km a day during the dry season to find  water.

Older or sick bull buffalos tend to leave the main herds and form small herds of their own, which can make them vulnerable to attacks by lions. These older boys are called 'dagga boys' - dagga is a slang term for crazy which is quite fitting as these old guys are often very grumpy and will charge anything on a whim.

Younger male bulls also form separate groups away from the main herds, but return to the main herd during the breeding season.

Both males and females have horns, but the male horns meet in the middle of the forehead forming a large 'boss' or shield-like skull protector.

Buffalo calves when born are extremely wobbly and vulnerable, but generally get up on their feet within 10 minutes. They remain relatively unstable for a few weeks, and are easy prey for many predators including lions, leopard, hyena and wild dog, unless protected by the herd. Calves suckle their mother between the hind legs, so that they can both continue walking while suckling.  The calf will stimulate the milk flow by head-butting their mother there.