One of the most beautiful of all the big cats

The leopard occurs throughout Southern Africa, and has a much wider distribution than any of the other 'big cats'.  It is a secretive, solitary animal, and will be found wherever there is sufficient cover for it to be concealed, such as dense bush or thick undergrowth, making it extremely difficult to spot. 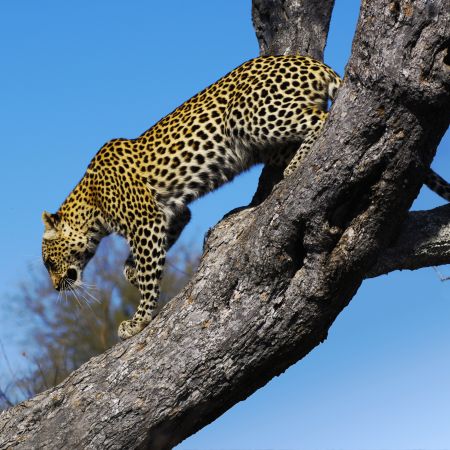 A leopard's spots are grouped together in groups of 4-6 to form clusters or 'rosettes' on their backs and upper legs, and the white tip on their tail is used as a guide for young cubs when following their mother at night.

The male is generally larger and heavier than the female, but both have relatively wide heads with short powerful jaws and long canines.

A Mother and her Cubs

A female will normally give birth to 2-3 cubs per litter, and will hide them when first born in thick thickets, hollow trees or caves, to protect them from predators.

The mother will leave her cubs for anything up to 2 days at a time while she goes off hunting.

The maternal bond is strong, and cubs will often stay with their mother for over 2 years, even if they are by this stage able to fend for themselves in the wild.

A nocturnal hunter, the leopard is extremely stealthy, and will stalk its prey until within 5 to 20m, and then pounce before the quarry has had a chance to realise that the leopard is there. The leopard will seldom give chase should it miss, and then for no further than 50m.

Leopards mainly preys on small to medium-sized prey such as antelope, baby zebra, hares and even mice and birds. Leopards also prey on lone baboons, but only an incredibly bold or stupid leopard who would attempt to attack one in a troop.

Once the prey has been killed, leopards will often drag the carcass up a tree to protect it from other scavengers such as lions or hyenas.