Baboons are the most widespread and largest members of the primate family, and an adult male can be as heavy as 50 kg.  Females are significantly smaller.  Both sexes walk on all 4 limbs with their tail held in an arch.

They live in troops, the size of which can vary immensely - anything from 10 to  up to 200, although the average size is about 30 - 40.   A complex and strict social hierarchy exists between all troop members. 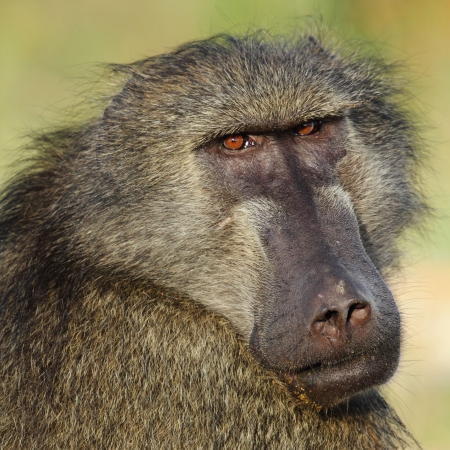 Although females make up the core of the troop, it is the males who dominate, with usually one dominant male and several subordinate males.  The females will tend to remain their whole lives in the same troop, whereas young males will transfer between different troops once they reach adolescence - normally about 4 years old.

The diet of baboons consists of grasses, seeds, fruit, mushrooms, twigs and bark, and invertebrates such as scorpions and grasshoppers.

Occasionally small reptiles such as frogs and lizards, or the young of ground-nesting birds, are caught, but only if the opportunity presents itself.

Adult male baboons have been know to catch hares and young antelope.

The activities of the troop members are highly co-ordinated, and they will all do the same thing together - feeding, resting, grooming.

They  are only active during the day, and at night will find a safe place to sleep - such as tree tops or cliffs - to avoid their main predator, the leopard.

Females will have usually only one offspring.  It is not uncommon for one of the males in the troop to adopt a 'godfather' role with the baby, which begins in infancy and lasts until they are at least 2 years old.