Famous for their starring role in the Great Migration

Also known as a gnu, the wildebeest is potentially the ugliest of the antelope species, as well as being the largest.

It has a black face, and a slate grey-coloured coat, with a dark mane on its neck and under its chin and throat. Both males and females have wide, flattened horns.

Wildebeest are grazers, and their wide muzzle is perfect for close, rapid feeding on short grass. They favour the open plains, but as they need to drink daily, they are limited to grazing land within a short distance from available water. Distant thunderstorms can stimulate a migration of over 50 km to find the resulting new, lush grassland.

Wildebeest form herds, which are normally dominated by one territorial bull.  A single male can command a harem herd of up to 40 females.Herds are active in the cool early mornings and late afternoons only, and during the heat of the day will rest.

Calves are born during a 3 week period only every season, just before or at the start of the most reliable rainfall.   A single calf is born, and can stand within 15 minutes. 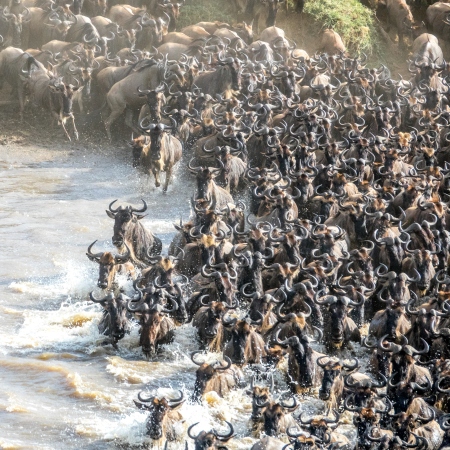 Young male calves leave the herd at about 2 years old, and form bachelor herds until they themselves become territorial, at around 4-5 years old.

Wildebeest are most known for their starring role in the Great Migration, when millions of them travel from the Southern Serengeti Plains up to Kenya's Masai Mara and back again - a gruelling journey of 1,800 miles.

Along the way, the wildbeest face many challenges - the predators who stalk the herds as they move across the plains, always on the look out for a vunerable wildebeest who has strayed away from the main herd; and the huge crocodiles who live in the Grumeti and Mara rivers, both which the wildebeest have to cross in order to get to the fresh grazing grass they have made the trek for.

For the avid safari-goer, this is one of life's true bucket list achievements - to witness this amazing spectacle which has been dubbed 'The Greatest Show on Earth'.