The largest reptile on earth

Crocodiles are believed to have wandered the planet alongside the dinosaurs aroud 240 million years ago - and really do still look prehistoric!

Widespread throughout Southern and East Africa today, an average adult male can grow to about 5m, although some have been known to reach as long as 6m.  Their average lifespan is 45 years. 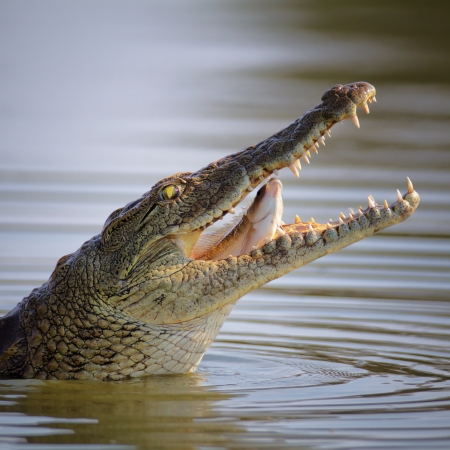 The Nile Crocodile is strictly carnivorous, and will eat almost anything from fish to large mammals who come down to the waters edge to drink, including lions, buffalo, zebra and giraffe. They have the strongest bite of any animal in the world.

In the water, crocodiles use their powerful tail to swim with, with a top swimming speed of up to about 20 km/h. On land, they can be surprisingly quick too but can only run at speed for a short distance.

Crocodiles also have a third eyelid, enabling them to keep water out of their eyes when submerged, so as not to affect their vision.

Determining the Sex of the Baby Crocodile

Nile crocodiles mate late in the year, and the female will normally lay anything from 20 to 80 eggs in a nest hole on the land.

The mother crocodile will care for her young until they reach 2 years old.

How to Tell a Crocodile from an Alligator

Crocodiles can easily be distinguished from alligators by their eyes - crocodiles have eyes on the top of their heads, whereas the alligator has eyes on the side of its head.