A nocturnal creature, honey badgers (or ratels) are known for being vicious, fearless and aggressive.  Black apart from a silver-grey and white mantle which extends from its head to the tail tip, the honey badger is powerfully built and will attack anyone who threatens it. 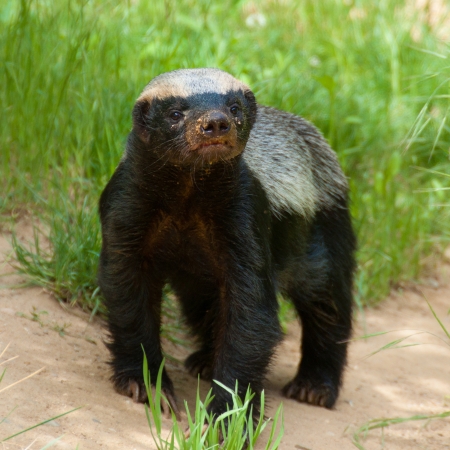 A fully grown adult male can stand as high as 30cm, and be up to 1m in total length.  Females are generally much smaller. They weigh on average around 25 pounds, but they do not let their relatively small size deter them.  They are quite happy to  stand up to lions, leopards and hyenas, and normally will win the day and see off the other larger predator.

They are generally solitary animals, and are one of the lesser seen African mammals. They live in burrows, which they excavate themselves with their strong foreclaws.

Their extremely thick skin seemingly makes them impervious to snake bites, as they are able to catch and eat even the most deadliest and poisonous snakes.

How the Honey Badger Got His Name