One of the most endangered African predators

Also known as the Cape Hunting Dog or the African Painted Dog, the African Wild Dog is now one of the most endangered species in the African bush.

They were commonly feared and therefore hunted by man up until the mid- 1960's, even in National Parks, and this, coupled with canine diseases that resulted in high mortality rates, has led to there being only 4,000 to 5,000 in the entire African continent. 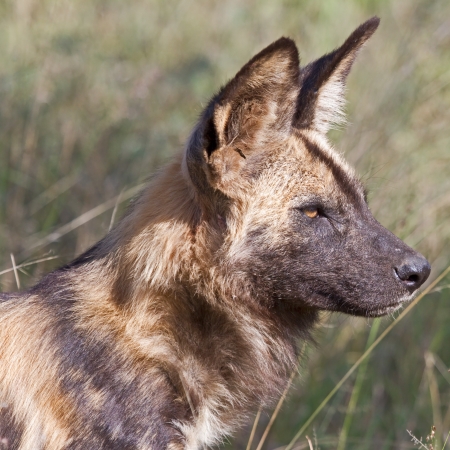 Of medium size, they have a short coat with distinctive brown, black and white blotchy markings, and very large round ears and long legs.

Living and Hunting in Packs

Wild dogs live in packs that can number 20 or more, but the average is about 10.  The pack is headed by one breeding pair and other non-breeding adults.

A pack may return to the same area, and even the same den, for the dominant female to give birth.

The majority of births happen during the second half of the rainy season (March to June), and a female can give birth to up to 10 pups in one litter.

The mother will keep the rest of the pack away from her pups until they are about 3 - 4 weeks old.

Unlike many other animals, it is the female pups that will leave the pack when they are about 2½ years, and the males stay.

The females will transfer to another pack, and will keep moving packs until they find the opportunity to displace the dominant female in the pack and begin breeding themselves. 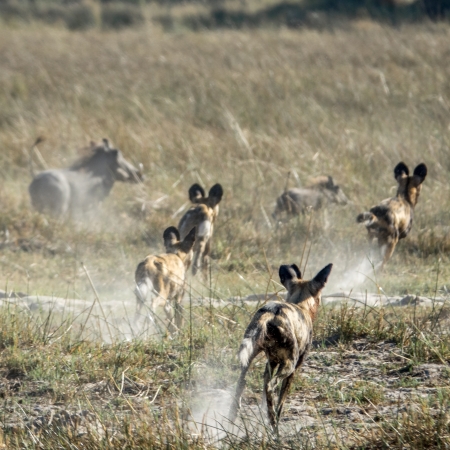 They are incredibly efficient  hunters, and can average up to 2 kills a day through simply having the endurance and stamina to pursue their quarry over long distances.

As they run down their prey, they do not need to hunt under the cover of darkness, so are generally active during the day only.

Hunting during the day also makes it easier to select their prey and keep it in sight.  If game is scarce, they will travel vast distances in a day to hunt for food.

They are generally inactive at night, but on bright moonlit nights will often travel and hunt as usual.

Wild dogs avoid forested areas, but move freely through scrubland, woodland and savanna areas wherever suitable prey can be found.

They are exclusively carnivorous, and will eat no plant food or insects.

They prey on medium sized antelope (such as impala, reedbuck or springbok), and will tend to concentrate their diet on one preferred species if there is an abundance of food supply.

Although they occasionally scavenge kills, they generally kill most of what they eat on pack hunts.