A striking looking member of the antelope family

Male and female nyala differ markedly in appearance.  Males are almost twice as heavy as the female, with slightly spiralling horns averaging 60cm in length. The tips of the horns are white, and can be used as an indication of the age of the nyala - the more white, the older the male nyala. 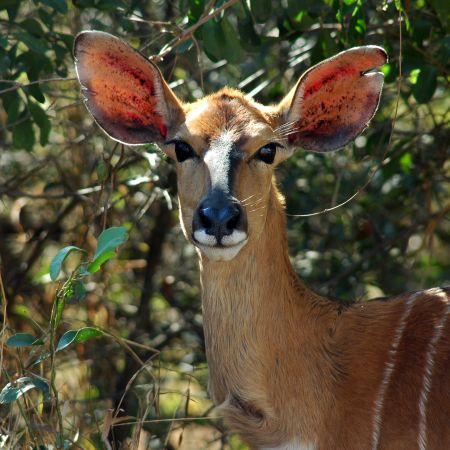 Males have a slate-grey colour coat, with rich caramel-coloured lower legs and a mane of dark hair along the back of the neck and from the throat right along the underbelly to between their hind legs.

Females, by comparison, are hornless and have a short, smooth caramel- coloured coating.

Both males and females do, however, share some physical characteristics.  Both have white vertical stripes on each flank - up to 18 in the females, and up to 14 in the males.

Both species also have 2 to 3 white cheek spots on their hind legs, and a V-shaped white line between their eyes.

Passive Males - Most of the Time

Unlike many other species, males do not compete for dominance unless a female is in estrous. Aggressive nyala males will dig and toss the soil with their horns, and to further intimidate their opposition, they will erect their manes to increase their perceived size. However, fierce fights between males very rarely occur, as the lesser male will generally submit to the more dominant display.

The Lifestyle of a Nyala

Nyalas tend to be found mostly in woodland areas, and along water courses. They feed on leaves, fruits and young grass - mainly grazing in wet Summer months, and browsing during the dry season. They are commonly found in small groups, which consist of either females and their offspring, or bachelor groups.  Mixed groups of nyala only occur when a female is in estrous.

Nyalas breed year-round, and the female will give birth to a single calf.