Facts about the Red Hartebeest

The red hartebeest is an ungainly-looking antelope, with a long narrow face, staring goat-like eyes with a tuft of hair under each one, and crooked horns.  It is a reddy-brown colouring along its back, a black/brown colour on its face, chin, back of neck, shoulders, thighs and tail, and the lower part of its rump is off-white.

Both sexes look alike, with the males being more sturdier built and with larger horns.

They are extremely swift runners, and can reach speeds of up to 65 km/h and have the stamina to maintain this over a long distance. 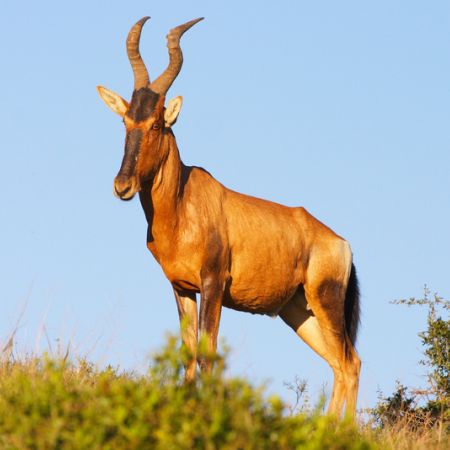 Red hartebeest are pure grazers, and can live without water, as long as they can take their required moisture from their food.

They usually live in herds of up to 20, either as a female only herd with offspring, a territorial male with his harem, or bachelor herds consisting of males who are either too young or too old to maintain a territory.

One of the herd will always be standing watch on higher ground such as a termite hill, to warn other herd members of approaching danger.

The main enemy of the red hartebeest is the lion, although young calves are also vulnerable to cheetah, leopard, wild dog and hyena.

Territorial males will defend their territories by threat displays and vicious fighting may result, especially during the mating season. Fighting consists mainly of violent pushing and jousting, with each hartebeest trying to interlock horns with the other in an attempt to wrestle their opponent off balance and onto the ground.

Dancing in front of Danger

When confronted by danger, they will gallop in a bouncing fashion with all 4 feet about half a metre off the ground, making them appear as if they are floating or running in slow motion. This action is designed to let the predator know that they are aware of him, and to demonstrate that they are fit - so watch out!

Calves are born October to December, and the mother will move away from herd to a secluded spot to give birth. The calf is concealed for its first few days, then rejoins the main herd.  Once weaned at about 8 months, it will form groups with other calves in the herd.