Are they black, white or just plain grey?

Many people expect the difference between the black and the white rhino to be their colour.  However, when you see them, you soon realise that they are both a dark grey colour.  Their main difference is their diet and habitat.

White rhinos are named after the Afrikaans word 'weit', meaning 'wide'. White rhino are grazers, so their mouths are wide and square shaped to enable them to graze more efficiently.  They are predominantly found on open savanna and grasslands. 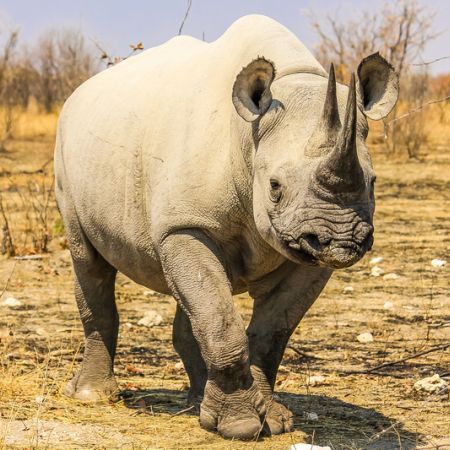 Black rhino are browsers, feeding off plants, leaves and shoots, so their top lip is triangular shaped to enable them to grasp the leaves more easier.  They prefer denser, thicker bush.

The black rhino is now extremely rare in Southern and East Africa, as it has been extensively hunted for its horns, and is now only found in a few areas.

Adult females are normally seen in pairs, or with their most recent offspring. When the female calves again, she will reject her first offspring, who will go off in search of another companion, preferably of the same sex and age.

The juvenile may also temporarily attach itself to another cow with a calf.

Males become solitary when they become adults, and will normally only associate with a female when she is in estrous.

Males can be territorial or non-territorial, and a territorial male will have at least 20 - 30 dung middens where he always defecates, scattering the pile with slow kicks before and after.

Attributes of a Rhino

Both species have a pair of horns.  The front horn of the white rhino is significantly longer than the other, whereas the horns of the black rhino are more even in length. Being hairless, rhinos love to wallow in mud, which acts as a barrier against the sun and ticks. They have extremely weak eyesight, but their hearing and sense of smell is extremely acute to make up for the poor eyesight. Being a proud member of the Big 5, they are not adverse to charging anything that they perceive is acting threateningly towards them. 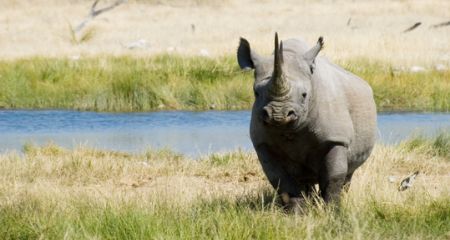 Females calf for the first time at around 7 years old, after a gestation period of 16 months.  Calves can stand within one hour of being born, but remain wobbly for several days, so the mother and calf will remain in dense cover for added protection. Calves tend to move in front of their mothers so that the female can more easily monitor where they are - but the calf always responds immediately should the mother change direction.

Rhino poaching has escalated in recent years. As South Africa is home to the majority of rhinos, this particular country has been heavily targetted and has suffered many losses.

Today, many reserves and National Parks employ anti-poaching teams to patrol the areas and protect rhino from poachers.

If you want to learn more about how you can make a difference, please get in touch with Save the Rhino and pledge your support to this worthy cause.