Regions in the Kruger National Park

Different Regions within the Park for Self-Drive Visitors to Explore

The Kruger National Park covers very nearly 20,000 km² (8,000 square miles) of undisturbed savanna, woodland, riverine forest and craggy mountain ranges.  To put that into context, it is an area comparable is size to Wales in the UK, the USA state of New Jersey, or Slovenia in Europe.

Because of the sheer size of the Park, it is only to be expected that the vegetation changes as you travel from north to south, which has implications on the game viewing opportunities too. As a general guide, don't expect to travel more than 25 km in an hour, which allows you to stop and enjoy the wildlife on the way. Always make sure you have plenty of water and refreshments in the car with you. 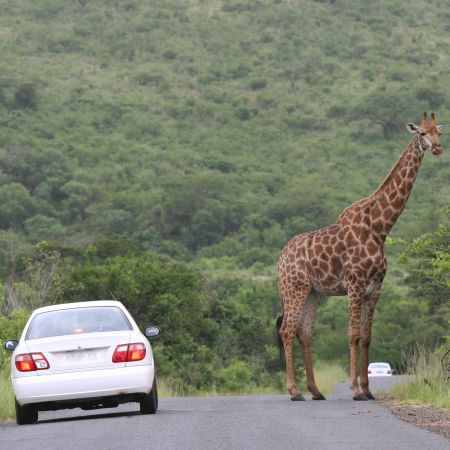 The Southern region covers the lower fifth of the Kruger Park, from the Sabie River down to the Crocodile River right in the south. The road from Skukuza Main Camp to Lower Sabie Main Camp runs parallel for most of the way with the Sabie River. The panoramic scenery is complemented by a surprising amount of excellent game viewing, making this route one of the top 5 game drives in the Park.

Further south, the vegetation becomes fairly dense, and is dominated by knobthorn and bushwillow trees. Because of the density of the bush here, it is not a particularly game-rich area, although it is home to more rhino than anywhere else in the Kruger Park.  There are plenty of impala and kudu, and lions are also a common sighting - and nothing is more wonderful than rounding a corner to see a lion walking down the road towards you!

As you get to the very far south, the lights from the distant towns and factories become visible, which unfortunately does remind you that an outside world does exist.

The Central region, stretching from the Sabie River north towards the Olifants River, includes some of the best scenery within the Park, and is widely acclaimed to be the most game-rich area. The vegetation is mainly wide grassy plains, interspersed with river valleys and woodland areas. Herds of giraffe, zebra and wildebeest wander over the plains, and because of their numbers, it is only natural to expect to find their main predator, the lion, not far away, normally resting under trees during the heat of the day.  Elephants, rhinos, buffalo and antelope prefer the denser woodland areas, which offer shade and food.

On the main road to Satara, stop off and look at the amazingly large baobab tree - a short drive off the tarmac road down a gravel loop, but well worth the diversion. 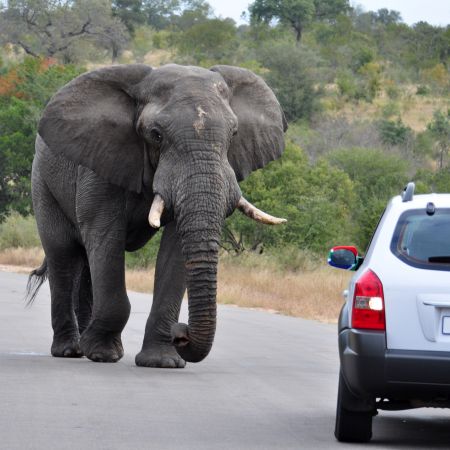 The Northern region extends from the Olifants River to the Tropic of Capricorn, and is mostly dominated by mopane trees. This is a firm favourite with elephants, so elephant sightings are common in this region of the Kruger Park, as well as buffalo and zebra. One of the scenic highlights is the view from the open terrace at Olifants Main Camp. You find yourself looking down into the Olifants River valley below, with stunning panoramic views across the bush.

A good game drive is between Olifants and Letaba Main Camps, as you can take one road there and another road back, so you are not doubling back on yourself. Look out for hippos, crocodiles and waterbuck at the water's edge while driving along the Letaba River road, as the road runs parallel to the Letaba River.

The Far Northern region extends from the Tropic of Capricorn right up to the Limpopo River (which is also the international boundary between Zimbabwe and South Africa), and is probably the least visited area of the Kruger Park. The area is mainly arid and flat, apart from around Punda Maria, where localised rainfall allows tall mopane trees to flourish in abundance.  North of here, craggy sandstone hills dominate the landscape, made even more impressive by the huge baobab trees.

Game viewing is best along the river systems, and this is a great area to see nyala, elephant, buffalo, cheetah and leopard.  Bird-watching is also particularly good too.