Sabi Sands Game Reserve is the definitive place for a classic South African safari. Sometimes known as the Sabi Sand Wildtuin, it is the most famous of the private reserves adjoining Kruger National Park, and for good reason. Covering over 65,000 hectares of wild bushland, it’s one of the top game-viewing spots in not just South Africa, but on the whole continent. It’s exclusive and exciting, so if you’re after a truly world class safari, Sabi Sands will tick every box. 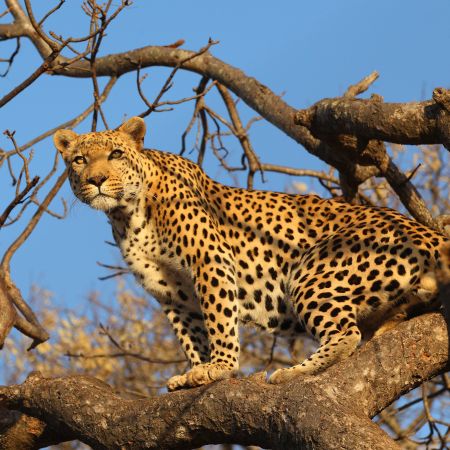 There are no fences dividing Sabi Sands from Kruger, meaning that the animals are free to roam between the two areas. This makes the reserve excellent for Big Five sightings, with lion, leopard, elephant, rhino and buffalo all wandering peacefully through its huge natural wilderness.

Sabi Sands is also particularly famous for its leopard sightings and has one of the highest concentrations of leopard in the whole world. As leopard are notoriously elusive and tricky to spot, it’s a perfect pick for anyone dotty about Big Cats.

Two rivers flow through Sabi Sands, providing valuable refreshment for thousands of animals. There’s an abundance of waterholes in the reserve, which are popular drinking haunts amongst ambling giraffes, gazelles and elephant - to name just a few! Cheetah, wild dog and another 200 animal species have all made their homes in the reserve, as well as over 350 species of birds. In fact, almost 5% of the world's bird species have been recorded in this region of South Africa!

Unlike Kruger next door, Sabi Sands has no public roads for self-drive safaris and no day visitors are allowed. This gives the reserve a really exclusive atmosphere. The rangers are not restricted to the roads and tracks, so you can follow leopard, lion and elephant deep into the bush on your own off-road safari adventure. This adds a huge adrenaline rush to each game drive and provides some incredible wildlife sightings as well as jaw-dropping photo opportunities. 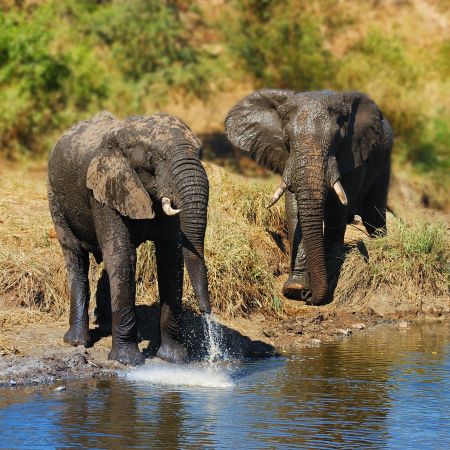 When you stay in Sabi Sands, you’ll be treated to two heart-thumping game drives per day. Every dawn and dusk you’ll set off into the bush in an open-topped vehicle to search for the Big Five in the African bush, stopping for sunrise coffee and sundown tipples. The game drives are led by expert guides and trackers, who will use their years of knowledge to give you close encounters with some of the planet’s most incredible animals. Nothing quite compares to drivng across open bushveld and through thickets to find a pride of lions lazing under thorn trees or a herd of elephants crossing a river.

Sabi Sands is just as exclusive as it is exciting. There are only a handful of luxury lodges sprinkled over the 65,000 hectares of Sabi Sands, ensuring that you’ll feel totally tucked away from the world. All of the lodges are beautifully styled and hugely atmospheric, providing an elegant contrast to the rugged bushveld, and many are brilliant value for money. Lounging in your own private plunge pool overlooking a waterhole or gazing out across the treetops from your balcony, you’ll get a real sense of the romance of Africa.

Nowhere else in South Africa will you experience a safari quite like the one you will have in Sabi Sands. We can’t recommend it highly enough.

Elephant Plains Game Lodge is situated on a dry river bed overlooking an open area with a waterhole in the northern section of the world-famous Sabi Sand reserve.  This location provides a wonderful base for game drives in search of Africa's Big 5.

Arathusa offers a warm welcome and excellent safari experience from its location within the northern sector of the Sabi Sand Reserve, a region that is renowned for its incredible concentrations of wildlife, including the Big 5.

Nkorho Bush Lodge is situated in the Big 5 Sabi Sands Private Game Reserve and can accommodate a maximum of 16 people in homely yet stylish en-suite thatched chalets. Game drives and bush walks are included in your safari experience here.

Idube Private Game Reserve is set in the heart of the exclusive Sabi Sand reserve adjoining the famous Kruger National Park. Built under towering knobthorn and jackalberry trees, the lodge and its friendly and welcoming staff are dedicated to giving guests a genuine bush experience.

Inyati has 11 en-suite luxury chalets which all have glorious river views. Each is equipped with air-conditioning, mosquito nets, telephone, and beautifully appointed bathrooms with outdoor showers.

Sir Richard Branson's Ulusaba Safari Lodge is set beneath a canopy of ancient trees on the edge of a dry riverbed in the Sabi Sands. The luxurious rooms are built 'tree house' style to give a true feeling of being at the heart of life in the bush, and all rooms and suites have air-conditioning and fans.