Madikwe is one of South Africa's largest game reserves and a popular safari choice as it is in a malaria-free area and a number of the lodges also welcome children.

Madikwe at a Glance

Madikwe Game Reserve is a magically remote wedge of wilderness hugging the border with Botswana, high in the North West Province of South Africa. Reaching across a staggering 75,000 hectares of malaria-free territory, it’s one of the largest game reserves in South Africa, yet amazingly, it still remains relatively untouched by mass tourism today. 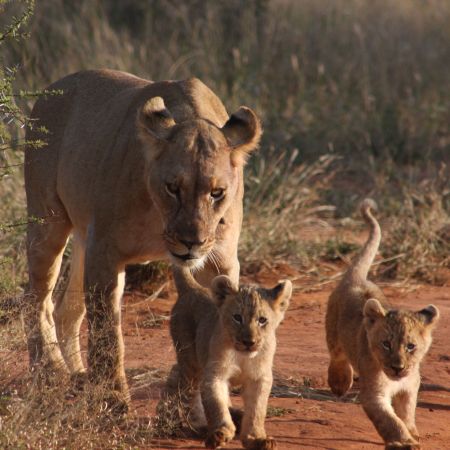 Not only is Madikwe huge in size, it’s also big on beauty. The landscape is richly varied, with rocky hills, flowing rivers, large stretches of savanna grassland, thick woodland and tangled masses of arid sweet bushveld. It’s a natural paradise packed with wildlife, from the famous Big Five to the rare African wild dog and the 300+ kinds of bird that chatter in the branches.

In total, over 66 species of large mammals roam the hills and valleys of Madikwe, often in great herds, so as a safari destination it’s second to none. Yet Madikwe feels worlds away from the madding crowds of Kruger, as fewer tourists venture far enough to reach this secluded pocket of South Africa. No day visitors are allowed, so a safari here is both exclusive and exhilarating. It’s a brilliant way to feel completely buried in the bush.

Madikwe’s lodges offer a variety of accommodation styles and wherever you choose to stay you’ll feel a million miles from home. You’ll be lulled to sleep by the sounds of the bush, stare into star-studded Africa skies and gaze out across open grasslands and waterholes. Whether you dream of a bush treehouse, a luxury tent, a thatched chalet or an elegant suite, or you are travelling with your young family, there will be something that is just right for you.

During your stay in Madikwe, you’ll set off on safari at first light, looking for wildlife as the sun rises over the mountains in the distance. You’ll return to the lodge for a full breakfast, then, you can spend the morning relaxing around the swimming pool, reading on your private deck or snoozing in the sunshine before enjoying a spot of lunch. Mid afternoon, you head back into the bush for another safari game drive, complete with a scenic sundowner as the sun sets. This is the rhythm of safari life, and it’s pretty hard to beat.

In terms of getting here from Johannesburg, there are 3 options that you can consider.

The first option is via light aircraft from Johannesburg OR Tambo Airport directly to the Madikwe Game Reserve. This daily service is run by Federal Air, and you are met at the airport by one of their professional Guest Relations team, and transferred to FedAir's private lounge where you can relax before boarding your flight to the reserve. The flight takes about an hour, and upon landing in the reserve, you are met and transferred to the lodge via an open safari vehicle. There is, however, a baggage restriction of 20 kg per person, and you have to have a 'soft' bag (for easy storage in the plane), but you can leave any excess baggage safely with FedAir, which you can then pick up when you return.  For guests arriving and/or departing via FedAir, the landing/departure fees are not included in your rate and are payable directly to the lodge.

The second option is to take a road transfer, which takes about 5 hours. The drive is quite interesting, as you pass through small developments and towns so you do get to see some of the countryside as you travel. You could also consider flying one way, and taking a road transfer the other way.

The last option is to hire a car from the airport and driving yourself to the reserve, which works out the least expensive but we appreciate that not everyone is comfortable driving the long distance, especially if you have just got off an international flight!  The roads are generally in good condition, therefore a 4x4 vehicle is not required.

Whichever way you make it to Madikwe, we promise that you’ll be in for a real treat.

Thakadu River Camp is set within the riverine canopy along the banks of the Marico River and consists of 12 tented suites, each with their own viewing deck overlooking the river. The tents are spacious and are superbly decorated and appointed.

The 5 Bush Villas are extremely spacious. the Family Villa consists of 3 air-conditioned rooms and is a perfect option for families or friends travelling together. The main lodge overlooks a waterhole frequented by elephant families and other big game.

The Bush House is an old homestead in the western part of Madikwe, and it is more like a home than a hotel. The veranda and garden overlook one of the best waterholes in the reserve, and the 5 guest rooms are simply decorated but equipped with air-conditioning, mosquito nets and percale linen.

Buffalo Ridge Safari Lodge is the only lodge of its kind in the Madikwe Game Reserve that is wholly-owned by a local rural community. Offering a very private experience, there are 8 uniquely decorated suites, each with their own deck which provides guests with expansive views to the north.

Impodimo Game Lodge is located on the malaria-free Madikwe Game Reserve, which boasts 75,000 hectares of Big 5 game viewing territory. Each of the glass fronted luxury suites enjoy uninterrupted views over the reserve from a private deck.

Sensational game viewing opportunities and a warm welcome await guests at Rhulani Safari Lodge in the Madikwe Game Reserve. There are 7 luxury chalets plus one luxury family suite, each with private deck and plunge pool, en-suite bathroom, indoor and outdoor showers, air-conditioning and mini bar.