The wine growing area of Constantia is not only the oldest in South Africa, it is also possibly one of the prettiest.  The Constantia Valley has been producing wine for over 300 years, from the very first vines planted in the Cape. 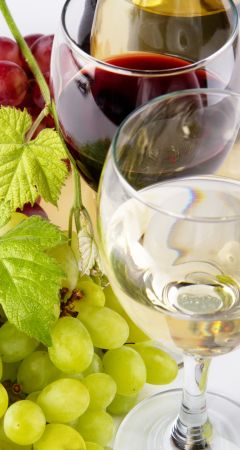 Only a 20 minute drive from the centre of Cape Town, this is a lovely place to visit for lunch to escape the hustle bustle of the city. Situated on gentle mountain slopes at the back of Table Mountain down towards the Cape Peninsula, the vineyards of Constantia bask in almost ideal grape-growing conditions - long sunny days, cool breezes direct from the ocean, plenty of rain during the Winter months, and a variety of soil types.

The oldest wine estate in South Africa, Groot Constantia was founded in 1685. Since then, the name has been linked to some of the most famous wines produced in South Africa, and has been a firm favourite of historic figures such as Napoleon Bonaparte, and members of the British Royal House. Visitors can go into the Manor House, a wonderful example of classic Cape Dutch architecture and today housing a cultural history museum with a fine collection of Cape furniture, porcelain and maritime art.  The Cloete Cellar houses a display of drinking vessels and wine making equipment.

The Jonkerhuis Restaurant offers tasty traditional Cape Malay dishes for a hearty lunch or dinner. Either dine alfresco facing the Manor House and looking out over the vineyards, or in the courtyard under a ceiling of trailing vines. The estate offers wine tastings, including keeping the glass as a souvenir. Daily guided cellar tours, including a wine tasting, are also available, but these should be booked in advance.

Klein Constantia estate, part of the farm that produced the Constantia wine prized by Europe's aristocracy in the 18th century, is considered one of South Africa's premier crus, its wines winning both local and international awards. All Klein Constantia's wines are grown, made and bottled on the estate, and they produce some excellent Sauvignon Blanc, Chardonnay and Cabernet Sauvignon wines.

Originally part of the Constantia Estate, this wine farm has embraced the concept of 'environmentally-friendly' farming on its 75 hectare estate, and the modern cellar includes some of the most up-to-date wine producing equipment in the Cape. Rated among the Top 10 Restaurants in South Africa, the restaurant offers wonderful food in a superb setting overlooking the surrounding vineyards.

Alternatively, tasty picnic baskets can be arranged for an idyllic lunch under the trees on the lawns.

Wines were first produced here in 1695.  Today, the original homestead has been restored in the style of an 18th century farm, and has been declared a National Monument. Based on the principle of 'Quality rather than Quantity', each carefully selected grape variety is matched with a specific soil type to ensure optimum wine producing potential.  In Steenberg's traditional gravity-fed barrel cellar, the wines mature in the finest tight grain French oak.