The Lapalala Reserve is a 35,000 hectare privately-owned nature reserve, situated in the mountains of the malaria-free Waterberg.

The Lapalala Reserve is a vast 35,000 hectare privately-owned nature reserve, situated in the mountains of the malaria-free Waterberg and only a 3½ hour drive from Johannesburg. The reserve was founded in 1981 and now forms part of the Waterberg Biosphere Reserve. The reserve is characterised by clear, natural rivers that run through bush-covered hills and craggy ravines.

Guests at Ant and Tessa Baber's Bush Camp can enjoy sightings on guided game drives and bush walks of rhino (both white and black), buffalo, warthog, hippo, giraffe, zebra, wildebeest, crocodile, leopard and baboons. There are also more than 20 antelope species, including sable, tsessebe, impala, eland and kudu. Birdwatchers will delight in the number of species on this reserve - currently estimated to be more than 290 species.

Other activities include fishing, swimming in the crystal clear rivers, and viewings of bushman art which are found on the reserve. 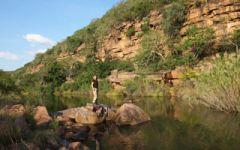