With over 320 days of sunshine per year, Durban is a holidaymakers' paradise.  The 6 km 'Golden Mile' of beaches are packed with sun worshippers throughout the year, while the warm waters of the Indian Ocean entice swimmers, surfers, diversand other watersport enthusiasts.  Just north of Durban is the more exclusive area of Umhlanga Rocks, with its golden sandy beaches and luxury hotels. 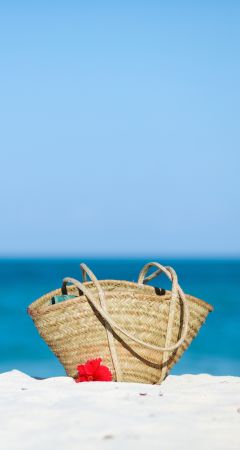 For those looking for things to do away from the sand and sea, Durban is a bustling cosmopolitan city with excellent restaurants, museums, live music and theatre.

Whilst the mid-summer months of February and March are known for being extremely hot and humid, the rest of the year is milder, and the tropical sunny climate gives the city a constant 'feel-good' appeal.

The city, although the second largest in South Africa, still feels relatively small and is easy to navigate around.  You can quite easily visit all the major attractions in one day, which include the Victoria Street market, City Hall and the Botanical Gardens.  However, as in every other city in South Africa, if you want to visit one of the townships, a guided tour is the only way to do this.

Nearly 3 million people live in Durban today, and its population is growing faster than almost any other city in the world.

Durban is also home to the largest population of Indian descendents in South Africa, whose ancestors were originally shipped to the region in the 19th century as slaves. It is not surprising, therefore, that the city is renowned for its aromatic spice markets and delicious curries - reputed to be some of the best in the world outside of India itself. 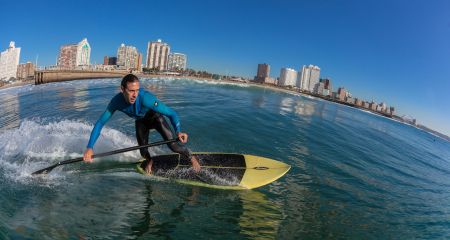 There is no getting away from the fact that it is the sun, sea and sand that really give Durban its extra appeal for overseas visitors and South African holidaymakers alike. 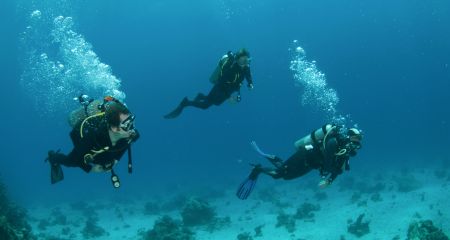 Some of the best diving in South Africa can be found at Aliwal Shoal, just 50 km south of Durban.  Aliwal is voted as being one of the top 10 dive sites in the world.

Other Attractions Near Durban

The Durban Country Club is 5 km from Durban's city centre, and is ranked in the world's top 100 golf courses. The course has hosted the South Africa Opens 17 times, which is more than any other golf course in SA can boast.

The first 5 opening holes are thought by some to be the best start to any round of golf in the world.

You will be wowed by the scenery throughout your game as the course undulates through lush and tropical vegetation, and you will play to the sound of the Indian Ocean just a stone's throw away.

Valley of a Thousand Hills

Visitors from the UK or New Zealand will find the landscape of the (optimistically named) Valley of a Thousand Hills very familiar. Rolling green hills scattered with small villages make this a pleasurable landscape to meander through and enjoy at your leisure. The first English settlers began to pioneer routes inland from the coast during the early 1830s, and the Valley of a Thousand Hills was the first overnight stop. A small 'hospitality industry' began, and has continued to grow and thrive ever since. The Paradise Valley Nature Reserve has several walking trails through the bush, and a number of waterfalls and scenic spots. 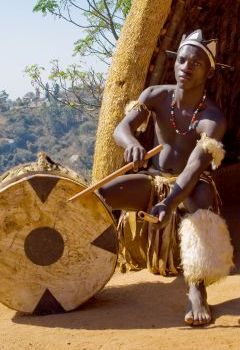 PheZulu is a purpose built Zulu 'village' only 35 km from Durban, which offers a theatrical telling of the history of South Africa's people, a tour of a Zulu village, and an exhibition of traditional Zulu dancing, all set against a magnificent view over the Valley of a Thousand Hills.  You can combine PheZulu with a visit to the Crocodile and Snake Farm, which is on the same site.

Ghandi spent much of his early career as a lawyer in South Africa, and his first home in the country was only a short drive from central Durban. Unfortunately, the original building was burned to the ground during rioting in the 1980s.  A replica building has been built on the same site, and this is now a museum. There is an extensive photographic record of this extraordinary man's life, although not much else actually remains from his time in South Africa.

The Monkeyland Primate Sanctuary at Ballito gives visitors the opportunity to go on a guided walk amongst many primate species, as they swing happily through the treetops above your head. The monkey sanctuary is open daily from 08:00 until 16:00 and is part of the South African Animal Sanctuary Alliance, who primary goal is to encourage commitment and understanding of the world's wildlife.

One of Durban's premier hotels, the Southern Sun Elangeni has breathtaking views of Durban's Golden Mile and warm Indian Ocean. All the air-conditioned rooms have sea views, and there are 3 outdoor pools (one of which is heated), beauty salons, a spa and a gymnasium.

The award-winning Beverly Hills hotel opened her doors over 50 years ago and is considered to be one of Durban's finest hotels. The hotel is situated in Umhlanga and boasts uninterrupted views of the Indian Ocean.

The Oyster Box Hotel is one of the region's longest established and most distinguished hotels. This grand hotel is set on a vast property on Umhlanga's prestigious beach front, with tropical landscaped gardens and direct beach access.

The Boathouse in Ballito

The Boathouse is a luxury 4* beach front retreat at the heart of the Dolphin Coast north of  Durban and flanked by golden beaches and the warm waters of the Indian Ocean.

Children of any age are welcome between June to the end August.

Teremok Marine, situated in Umhlanga Rocks on the coast in South Africa, just moments from the beach, has been meticulously transformed into a luxurious haven. Personalised service and attention to detail compliment in this contemporary property.

Umdloti’s beach is regarded as one of South Africa’s best kept secrets and Fairlight holds an absolutely premium spot that overlooks the finest bathing and surfing beach in the area. This luxury 4* rated guest house caters for couples and families, with each room featuring air-conditioning for the warm summer nights.