The 260,000 hectares covered by the St Lucia Wetland Park (or the iSimangaliso Wetland Park as it is also known as) is home to a diverse number of habitats and wildlife.  The Park stretches along the coast from Sodwana Bay in the north to the Mapelane Nature Reserve in the south.

Coastal beaches and sand dunes, wetlands, bushveld, coastal forests and mangrove swamps are all here, as well as South Africa's most southernmost coral reef off the Sodwana Bay coastline, a diving and snorkelling paradise and home to an extremely large number of colourful tropical fish species. 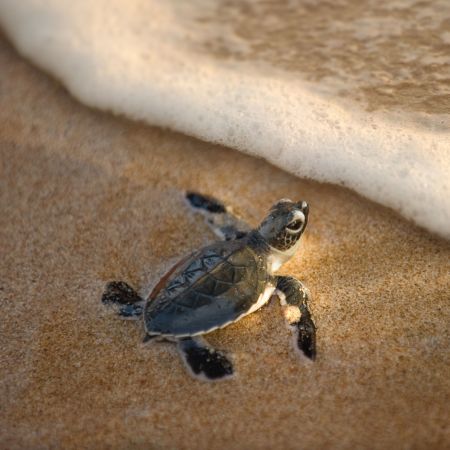 Although the Sodwana reef system may be a mere fraction of the size of the more famous Great Barrier Reef, it is estimated to contain more the two-thirds the amount of fish species - 1,200 in Sodwana as opposed to 1,500.  Sightings of whale sharks, ragged tooth sharks, mantas and dolphins are also part of the diving experience here too!

Several local operators offer Turtle Tours. Only two breeds of Maputaland turtles lay their eggs on these shores, namely the Leatherback and Loggerhead. Enjoy an evening searching for them returning to their birthplace to lay their eggs and later in the season see the hatchlings making their dash for the ocean. These tours operate from November to February/March only, and are subject to availability and favourable weather conditions.

The Park also incorporates the 38,000 hectare Lake St Lucia, a vast expanse of lake, estuaries and islands. Swimming in the lake is prohibited due to the presence of over 1,500 crocodiles, the largest population in South Africa.  Boat trips and cruises are a popular way to sight these formidable creatures, swimming or basking in the sun on the lake shores. There are also nearly 1,000 hippos in the lake as well, and occasionally black fin and Zambezi River sharks can be seen.

Further north along the KZN coastline, on the border with Mozambique, is the Kosi Bay Nature Reserve. Where seawater and fresh water mix, there is an abundance of nutrition for countless species of fish and an equally impressive variety of birds.

Set above a secluded bay, Thonga Beach Lodge is nestled into beautiful coastal dune forest with sweeping views of the stunning beach below. The spacious thatched rooms offer either ocean or forest views and the Deluxe Ocean View rooms also have a private plunge pool.

Makakatana Bay lodge is the only privately owned game lodge set within the Greater St Lucia Wetland Park World Heritage Site - the heart of Africa's largest natural estuary.Set in the dune forest, the grounds surrounding the rooms are frequented by warthog, red duiker, nyala, bush babies and a variety of birdlife.

Kosi Forest Lodge is located in a private nature reserve alongside one of the lakes in the Kosi Lakes system, an unspoilt wilderness area which forms part of the Greater St Lucia Wetland Park Activities here include guided canoeing on the lakes, walks in the Raffia Forest, boat trips, and snorkelling.